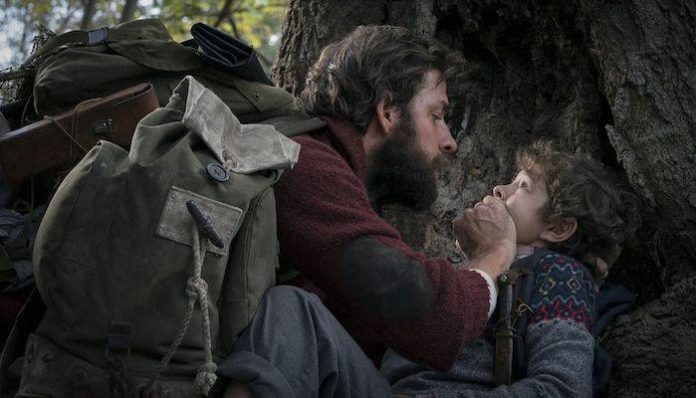 Knives and dead women are no longer scary. Silence is the new it horror. Thanks to John Krasinki’s third directorial run.

Parents Evelyn (Emily Blunt) and Lee (John Krasinski) have three kids in upstate New York. They continue living as apocalyptic creatures wipe out their neighbors and the world’s remaining population. The monsters are frequency sensitive that an abrupt yet brutal death is easy to come about, owing to even a very minuscule noise.

As if accepting the faith, Lee and Evelyn Abbott challenge themselves to ensure their children to “be fully-formed and fully-thinking people”, doing it all inquietude. Having a deaf daughter (Millicent Simmonds) makes the family master the sign language that leads to ‘safe and normal’ life. Until eagerness to hear a sound breaks the rule of silence, causing one of the children to end up fatally killed in an emotionally staged tear-jerking scene.

The movie jumps forward 14 months  later, showing that the family is happily living in a farmhouse equipped with alert and protection. They seem to prepare a soundproof room designed for the labor process and the future baby now that Evelyn is pregnant. Yes, questions and piques are airing when she is shown having a baby bump. Honestly, I do think instantly that it is in fact very realistic when the couple still has the nature to have another baby. It hints at an action of moving on. Despite this, the decision might be implying guilt of losing a child, or wanting to prove an ability to really protect their children.

As the movie goes, characters of each individual are getting stronger. You will find it easy to pick someone to root for. Lee Abbott – protective, intelligent, and venturesome. Evelyn Abbott – devoted, strong, and positive. Regan Abbott – tender, quick-witted, obstinate. Marcus Abbott (Noah Jupe) – vigilant, altruistic, sentimental.

Throughout the movie, jump scares are always on anticipation. The characters never ever talk, except to whisper in extremely tiny breathy voice, and will always make you be cautious of any sound they unintentionally make. More, the monsters’ physical presentation is shown a couple times, giving maximum thrilling experience every time it happens. They have an alien-like visual with an intricate hearing system which opens up whenever noises are censored.

The movie starts reaching climax when the stubborn daughter decides to leave for the spot where her youngest brother was killed, right after not being allowed to go survival learning by her father, who goes with her brother instead. It gets more intense when the mother is about to deliver the baby and steps onto a big nail, finally making a ‘forte’ noise. While trying to hold back all the agony, she plays hide and seek with a monster which has made its way inside the house. With each of the family members apart from each other, adrenaline rushes, wondering which of them will be eliminated.

Regular horror movies will scare you with creepy and loud scores, ‘A Quiet Place’ is otherwise. It will put you in your most relaxed position just when the music plays, and you won’t even call it relaxing. When basic horror movies put you in “you should/shouldn’t do that” moments at times, you will notice that the characters of this movie always set the best dead or alive decision.

If you have ever seen Fede Álvarez’s ‘Don’t Breathe,’ you might notice that basically, it adapts the idea. However this time, the antagonist is much more sudden and violent, doing the terror in a far bigger space, not a single house. Apart from its scary ingredient, an emotional element relatable to real life, parenting, is the other half component wrapping this movie in a beautiful thrilling package.

Who are we if we can’t protect them?

Featured image via A Quiet Place

How To Cope And Emotionally Move On After Being Cheated On