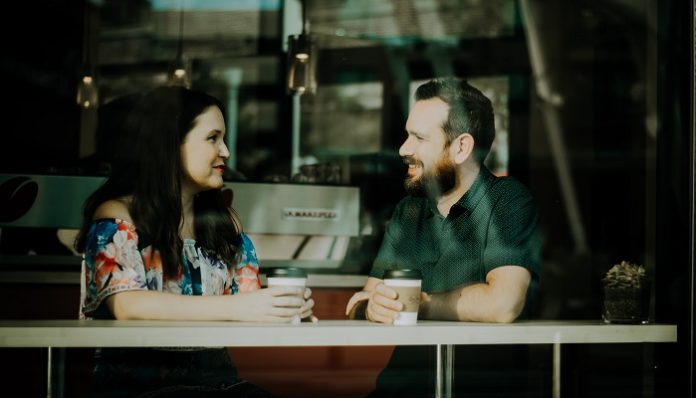 “I have a crush on a boy” is a text message I sent to a friend recently. It wasn’t until later, mid-conversation, that I noticed my vernacular on the subject: “crush” and “boy.” I sounded like my 1998, 15-year-old self, anxiously waiting for the landline to ring.

Yet, here I was: A moderately smart, fairly capable 31-year-old woman who had been reduced to high school-isms when it came to having a crush and approaching the opposite sex. I like to think that I’ve matured, and yet, here I find myself nervous around this boy — sorry… man.

What is it about having a bit of romantic interest in another human being that turns us into puddles, incapable of coherent thought?

Don’t try to deny it. We all do it. We get sweaty, feeling the interest vibrate throughout our bodies. Even the simplest “OK” text is met with far too much analysis. “What exactly does ‘OK’ mean?” I anxiously await some form of communication, except now it’s not via the house phone ringing, but the ding from my iPhone.

When it does finally ding, I pick my phone up quickly and look at the screen. It’s him. I read his words carefully, not once but five times, trying to parse out the meaning behind “Want to get together tomorrow night?” as if there’s some hidden meaning behind those words.

Men are pretty simple creatures, right? “Let’s get together” has no other meaning except let’s, in fact, get together. And yet, there I sit trying to think of a witty, clever response.

The overanalysis sets in. If I reply too soon I come across as “too needy,” like I don’t have a life. But I don’t want to sit on the message for too long lest he suddenly make other plans. I finally respond that I can get together and we speak more.

After we say our goodbyes I pour a glass of wine and go back through the conversation, analyzing my responses and whether or not I said the right thing. I notice a moment or two when I hoped for a different response from him.

“Why can’t he read my mind?” I text another friend.

“Boys are stupid,” is her succinct response.

Is there some other, more grown-up word that I can use to describe the situation? “Interest,” perhaps?

Whatever it is, this thing has turned me into a girl I despise. I find myself caring way too much about what he thinks about my hair, clothes, lip gloss, even my freaking pedicure.

I’ve definitely reverted to 15-year-old-Heather. I’m genuinely excited to hear from this man because in some possibly superficial way, he makes me happy. He always responds even if it’s the next day, and when he does sit on a text for more than 12 hours, his response always comes with an apology.

I dissect the words on my screen and sometimes wish that I could take them back no matter how innocuous. See? I’m totally 15 years old.

Or at least that’s what I remember. In high school, there were many guys to choose from and you were surrounded by them every day. At 30, you need to put in the effort and arrange your schedule. Every conversation you think might be the last because he could up and disappear at any moment with nary a word.

2. At 15, if the crush isn’t reciprocated you can eat your weight in pizza and metabolize it in a day.

At 30, you drink your weight in wine and spend the next day wishing for a swift death to take you away from your hangover.

3. At 15, you tell your friends about your unrequited crush and they give you a hug with a gentle pat.

At 30, it’s war stories; everyone has had it worse. We’re all single, looking, and, at times, hopeless.

At 30, my father wonders if there’s something wrong with me. “Do you think I’ll get grandchildren?”

At 30, if this guy doesn’t like you, will there ever be another?

At 30, there are gray hairs. You worry about the state of your ovaries.

7. At 15, a lifetime is forever and there is so much more ahead.

Who cares about a stupid boy? At 30, I’m going to be alone forever, aren’t I? My cat picks this moment to curl up next to me.

At 30, I like, LIKE someone and the senses are heightened and it feels that action must be taken immediately because it took so much work to even get the time to sit down for a conversation. Major high-fives for being able to schedule an actual date of sorts. I’m exhausted and exhilarated.

Originally written by heatherbarmore on YourTango

To The Extroverts Who Struggle With Social Anxiety

Why Modesty Is My Favorite Thing To Wear

Why Being Called ‘A Wanderer’ Is A Total Compliment