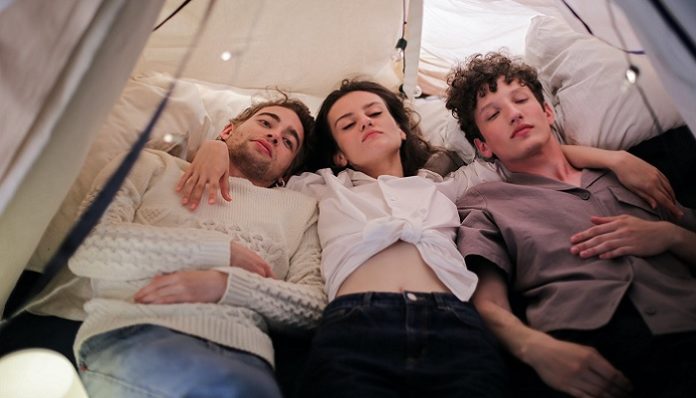 Amidst a crowded dance floor, a slender blonde woman leaned over to whisper in my ear. “You’re a very attractive couple,” she purred. I smiled at her — an ego boost is always lovely — and continued dancing with my boyfriend. The man she was with gave me a high-five and kept flashing smiles my way. Was he trying to hit on me? It could not have been any more clear: I was there with my boyfriend.

Every time I looked up for the next half hour, I felt one of them trying to make eye contact with me. When we left the bar, my boyfriend asked if I’d noticed the couple.

“I think they were trying to hit on me,” he said.

“No, they were hitting on me,” I replied.

Then it dawned on us — they were hitting on us as a couple. That’s funny, we both thought. And then he looked at me and said, “I don’t want to share you with anyone.” “Neither do I,” I replied. Exclusivity with one partner is where I’m comfortable in a romantic relationship.

The model for romance in our culture is so dominated by the monogamous male-female relationship that most people subscribe to it without stopping to consider the alternatives. But not everyone is uncomfortable with sharing his or her partner.

People in open relationships often feel happiness or pleasure when their partner has romantic adventures with other people. This feeling is sometimes called compersion.

Compersion is a feeling of joy from others’ pleasure, specifically celebrating your partner(s)’ other relationships in a polyamorous structure. In this sense, compersion is often defined as the opposite of jealousy. The Kerista Commune, a now-defunct San Francisco-based polyamorous community, is credited with coining the term about 40 years ago.

Compersion doesn’t just apply to sexual relationships, however. According to Urban Dictionary, compersion “differs from candaulism in that compersion does not specifically refer to joy regarding the sexual activity of one’s partner, but refers instead to joy at the relationship with another romantic and/or sexual partner. It is analogous to the feeling of joy a parent feels when their children marry or that best friends feel for each other when they are happy in a romantic relationship.”

What is poly compersion?

Compersion is a term used in the poly community, meaning a feeling of happiness, warmth, and joy in seeing your partner with another person. To explain further, poly compersion is a feeling of pleasure one person gets from seeing one of their romantic partners enjoy the presence of a metamour — i.e., your partner’s partner.

What is the opposite of compersion?

Since compersion is feeling happiness from your partner enjoying other people, the opposite would be, well… jealousy. The opposite of compersion means becoming upset, jealous, or sad that your significant other is with another person, romantically or sexually.

Openly sharing love is the essence of compersion; therefore, jealousy would be the opposite.

How do you experience compersion?

The word compersion is widely used in poly circles, but anyone in a non-monogamous relationship can experience joy from a partner’s other love interests. When Shara Smith started dating Brian Downes, he was already in a relationship with someone else. He wanted to be careful about respecting Stephanie, his first partner.

“He wanted to take all the right steps, and that made me more attracted to him,” said Shara. She described compersion as a “positive emotional reaction to a lover’s other relationship… I love to watch his face light up when she calls because I know how much he cares about her.”

Shara doesn’t view other partners as competition. “Every relationship is unique, and nobody can replace me because they are not me.” “It’s like a parent watching their children spread their wings and fly,” added Anita Wagner, describing the joy she feels when someone makes her partner happy.

Anita is a polyamory skills educator and an advocate who decided to go the non-monogamous route in her 40s, after two marriages and divorces. “I like the openness and honesty polyamory offers. I’d rather share my partner openly than have him cheat on me,” she said.

I could see how appreciative he was that I went out of my way to put Mary at ease and signal my approval. His happiness at being free to develop a relationship with Mary was so warm and his love for me so evident.”

Birgitte Philippides, president of PolyNYC, feels “glorious and wonderful” seeing someone fulfill the desires of her partner. When the spouse of one of Birgitte’s partners told Birgitte she loved her in a platonic way, she reacted by saying, “It doesn’t get much better than that in this relationship style.”

Shara, Anita, and Birgitte’s happiness seem to defy the well-known adage, “You can’t have your cake and eat it, too.”

Do polyamorous people get jealous?

Wouldn’t these types of relationships create jealousy and insecurity? Many people would think so. But at the end of it all, we are all human and we all feel jealous at some point in our lives, no matter our sexual or romantic orientation.

“It does require a fair amount of emotional intelligence and maturity,” said Anita. Her path from monogamy to experiencing compersion in open relationships took some “emotional stretching.”

“If I’m feeling jealous, it’s probably because I’m not getting some of my needs met, and that is usually because I haven’t asked for it or created the environment to receive it,” added Birgitte. She feels that being open about her jealousy is the first and most important step to getting past it.

All three women stated directly or indirectly that you could avoid or overcome jealousy and insecurity by ensuring that everyone’s needs are met and that all partners are equally happy. Achieving that balance seems essential for people in open relationships to experience compersion.

These women are unapologetically happy with their non-monogamous relationships, and compersion appears to be a cherished benefit of this lifestyle. Love is not a zero-sum game. It’s sharable and enjoyable across multiple people in non-traditional formats.

How to Cultivate Compersion

It takes work to feel compersive for your partner. According to psychotherapist Paula Kirsch, to cultivate compersion, “Give yourself a break and recognize fear as neither good nor bad; it is normal. Love is not scarce: adopt an abundance mindset.”

There are a few components necessary to experience compersion in a non-monogamous relationship.

Empathy is a necessity for compersion to work in your relationship. You need to be able to understand what your partner is feeling, along with their needs and wants. You need to be understanding to have the emotional maturity required to control jealousy (something that is entirely normal). “Have empathy and realize that your partner’s joy can be yours. Feel it!” Kirsch says.

When cultivating compersion, in the beginning stages, especially, you may have those feelings of jealousy pop up. It’s best to reason through your jealousy together intellectually. Remind yourself that your first partner respects you and doesn’t want you to be anyone else. Have conversations to reason out the jealousy. Remember that your partner loves you.

To feel compersion and practice it within a relationship, you first have to feel safe and secure. Make sure you’re addressing any feelings of jealousy that bubble up in either of you with a lot of love and gentleness as a couple. Encourage each other to dig through the envy to uncover the fear behind it. This way, you can remedy it together.

As Kirsch suggests, “Focus on your personal growth. Learn something new, expand your circle of friends. Process feelings with your partner.”

Read This If You’re Struggling To Love Again

Read This If You’re Struggling With A Long Distance Relationship

If You Want Your Relationship To Last, You Need To Know...