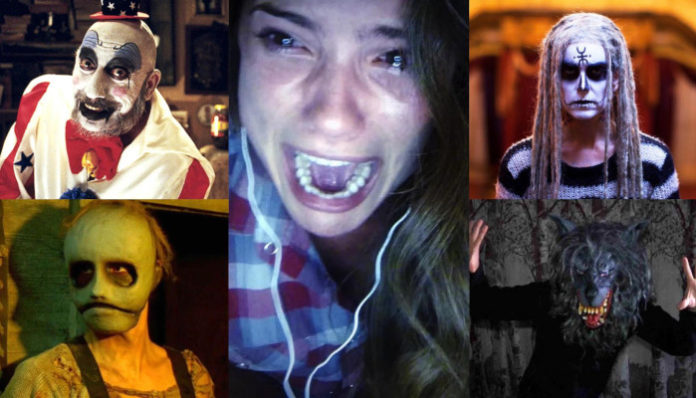 We all know the holiday favorites that will air on cable and stream on laptops this week: Hocus Pocus, The Rocky Horror Picture Show, Beetlejuice, Insidious, Shaun of the Dead, and of course, Halloween. If you’re like me, however, you’re probably looking to spice up your spooky scary watchlist with something a little different. Well look no further, for I have compiled a shortlist of lesser-known horror gems that are available to stream right now!

1. Behind the Mask: The Rise of Leslie Vernon (Amazon Prime)

Similar to The Cabin in the Woods and Scream, this genre satire takes a closer look at the well-worn tropes of slasher movies and subverts them. It follows a young journalist who documents a serial killer preparing for his first string of murders. As crazy as that sounds, the film is undeniably funny and disarming, until it slowly reveals its more sinister intentions.

Heavy metal musician Rob Zombie made an unshakable impression with his debut film. The movie highlights a family of psychotic rednecks who capture and torture of two teenage couples on Halloween Eve, 1977. Zombie shamelessly borrows from gritty classics like The Texas Chain Saw Massacre. However, its lack of originality is redeemed by its relentless, hardcore imagery. The result is a twisted, bloody nightmare that’s ultimately a ton of fun if you can tune into its madness.

Shot in the style of a documentary, this creepy little movie chronicles a group of haunted house creators and the events that led to a mysterious “malfunction” killing fifteen people at the attraction. Claustrophobic viewers should proceed with caution for this one. All the same, I’d say it is certainly worth braving the scenes featuring long, dark hallways for its other spooky delights.

Here’s a found-footage gem that proves you can get quite a few scares in with only two characters on screen. At first, Patrick Brice’s directorial debut doesn’t seem like anything more than the story of a man, his camera, and the awkward loner he is being paid to film. Then this weirdo starts talking, and the more he does, the more unsettling and wickedly uncomfortable things get. If you enjoy this one, its sequel (Creep 2) is also available on Netflix.

5. The Lords of Salem (Amazon Prime)

Another Rob Zombie banger that I absolutely had to include on this list. An R-rated alternative to the innocent, witchy fun of Hocus Pocus, the film finds recovering drug addict and disc jockey Heidi (played by Zombie’s wife, Sheri Moon) as she slowly falls into the hands of a Satanic coven. Explicit in image, but deeply human in nature, Zombie’s masterpiece is about what happens when you are unable to conquer your demons.

When this film released back in 2015, I felt it was unfairly glossed over by the majority of its target audience. Sure it focuses on a group of selfish high schoolers being haunted by the vengeful spirit of their deceased friend through their laptops, but as a timely, supernatural chiller for the digital age, you could do so much worse. FaceTime glitches, typing symbols, and pinwheels have never been so frightening before.

If you love ghost stories, put this one at the very top of your watchlist. Having suffered from little-to-no theatrical distribution, this Australian masterwork went virtually unheard of when it released 10 years ago. A real shame, no doubt, because this is easily the scariest movie I have ever seen. I won’t say much more about it other than to go in completely blind if you’re interested. It might not scare you as much as it scared me, but I defy anyone who doesn’t come out a little petrified by it.

Any double or triple feature from my list should get you into the holiday spirit this Halloween week. If there is to be a common thread among them, though, it is definitely how much these films stood out to me. Some of them aren’t perfect and may not totally scare you, but they’ll linger in your mind longer than you might want them to.

Feature Image Created By The Author via The Above Movie Trailers