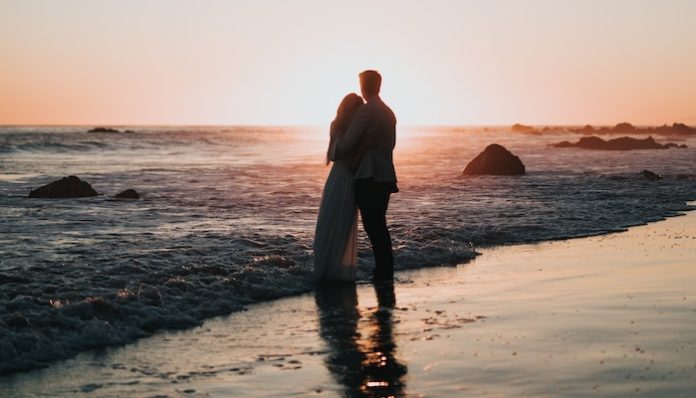 The minute I spotted my now-husband, Andrew on the crowded dance floor, I had one thought: That man is going to carry my baby in a backpack.

Our first date was Thursday.. After two years of “my place or yours?” we moved in together. And with increasing frequency—usually at the weddings of friends—someone would inevitably inquire, “So… when will you get married?”

It was a question I had myself. I sat in editorial meetings with the smartest, most independent women I had ever met and nodded along when they said that marriage was an unnecessary social construct. These observations made sense to me.

They weren’t saying that women should never marry, but they were asking us to consider the institution on its own terms.

Each night after work, I would continue the discussion with Andrew, who shared my views. “How could anyone? Why would anyone?” we pondered. And just like that, I had talked my future husband out of marriage.

Slowly, I was coming around to the idea of marriage.

But when I brought up our future, he remained unconvinced. “I love you,” he told me. “You know you’re the person I want to be with. There’s no reason for us to get married.”

Marriage, for all its faults, was a public declaration of our love for each other. I was ready to shout, “I love this man!” And I wanted everyone we cared about to bear witness.

I had always assumed my engagement would be a romantic gesture.It was clear to me that I had to take matters into my own hands—but I was about to rewrite the rules, and it was scary.

“I’d like to buy an engagement ring for my boyfriend,” I told the brawny, salt-and-pepper-haired man behind the counter.

After a long pause, he threw up his hands. “Well, it is a new millennium,” he said, grabbing a tray of diamond-encrusted men’s rings. And later, I walked out with the ring that I would give to Andrew.

In other words, I was about to ask a man to spend the rest of his life with me, and I had never looked worse. Was I crazy?

As my deadline got closer and closer, I kept stalling I slid out of bed and pulled the ring box out of the nightstand. I held it for a moment and then, fumbling in the darkness, placed the box back in the drawer. Then I crawled back into bed, defeated. I had failed.

Meanwhile, I continued to prod Andrew about marriage, hoping he would change his mind.

I had the ring, but I didn’t have the confidence to follow through. Driving home one night, I pressed extra hard. I can still hear him reply : “I am not particularly motivated to get married.”

When he  came in and sat against his pillow, I suddenly threw back the blankets, flicked on the light and grabbed the ring box. I opened it and with a thud planted it on his nightstand. “There’s your engagement ring,” I said, my face wet with tears. I crawled back under the covers.

“Babe,” he said, his voice full of tenderness and apology. He leaned down and kissed me for a long time. “I love you. I know that I am going to spend the rest of my life with you.” We kissed again and I cried some more. We looked at each other and smiled at the absurdity of the moment. Then, he whispered, “Let’s get married.”I grinned and, I replied, “Let’s.”