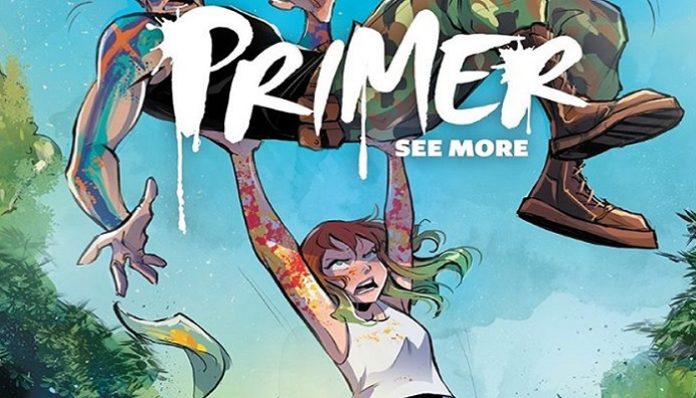 D.C. Comic’s newest superhero, Primer, is on the scene, and she is who we have all been waiting for. Her story celebrates girl power, diversity, and never giving up. What’s more, the graphic novel was named one of Amazon’s Best Books of June and ranked as the best selling DC book for July. Thanks to the warm reception of Primer, a second printing of the graphic novel was recently announced.

Primer tells the story of a 13-year-old girl, named Ashley Rayburn. Ashley feels trapped by events from her past, and her inability to disassociate herself from her father, who is a dangerous criminal. We meet Ashley as she enters a new foster home, which she assumes will be a failure like the rest of her foster placements. However, being an artist Ashley quickly bonds with her new foster dad, Kitch, who is also an artist. She also befriends Luke, who dreams of becoming a hairdresser.

Afterward, Ashley stumbles upon a secret project that her foster mom, Yuka, had been creating for a high-level tech company. Ashley thought she had accidentally found normal body paints that were supposed to be a present for her upcoming birthday. However, in actuality, the body paints give the wearer superpowers and were intended for military use. It’s a discovery Ashley wasn’t supposed to make, and it quickly spells trouble for the teenager and her new friends and family.

I could give you endless reasons to love Primer, but I think it’s better if you hear about all its magic directly from one of the authors. Thomas Krajewski, who co-wrote the graphic novel with Jennifer Muro, was kind enough to do a Q&A session with me about what makes Primer so remarkable.

CK: What makes Primer/Ashley so relatable?

Thomas Krajewski: Ashley is relatable because she’s not perfect. She’s funny, goofy, and she makes mistakes, but she never stops trying. Also, Ashley’s story is one of redemption and proving that one’s past doesn’t define the future. I think she feels unworthy of happiness because her father is a criminal, and she was forced to help him when she was younger. She doesn’t realize that she was dependent on him, and how his bullying affected her. Throughout the novel, she struggles to learn that she can be whoever she wants to be regardless of her past. As Ashley becomes Primer, she even breaks free of her past.

CK: Why did you choose to make Ashley a female character?

TK: I wanted to see another strong, relatable female character. I haven’t really seen one until Wonder Woman, and I know that representation of a strong woman helps a lot of people. Furthermore, my mother and sisters are some of the most inspirational and strong women that I have ever met in my life, and I look up to them. Ashley is basically a combination of the best qualities of my mom and sisters.

CK: How does Primer celebrate uniqueness?

TK: When I was growing up, I always saw unobtainable characters in the media. I was never going to be the perfect macho man, like Arnold Schwarzenegger. As a result, it made me feel inferior. I relate a lot to Kitch and Luke in Primer, because they are two male characters who don’t fit into stereotypical male roles. Kitch isn’t the typical husband who acts as the breadwinner for the family. Luke isn’t going to be your typical macho man either. But, they are extremely talented artists and are accepted for what they love. I hope it shows the readers that they aren’t confined to stereotypical roles and that more people can see themselves represented in these characters.

CK: Why is Primer the superhero we need right now?

TK: 2020 is a dark year, and Primer is a source of hope. In the novel, Ashley faces challenges and obstacles in pursuit of her goals, and at times she feels defeated. However, she never gives up and we can’t either. What’s more, a large audience seems to be responding to Primer, from children to adults. Since she is reaching such a wide audience, I hope that Primer can replace messages of hate and fear with messages of acceptance, growth, and strength. At the very least, you can’t be sad when looking at Gretel Lusky’s incredible, colorful art throughout the novel. It’s a brief mental escape from reality, which we all need sometimes.

If you’re ready to fall in love with Primer, check it out on Amazon.