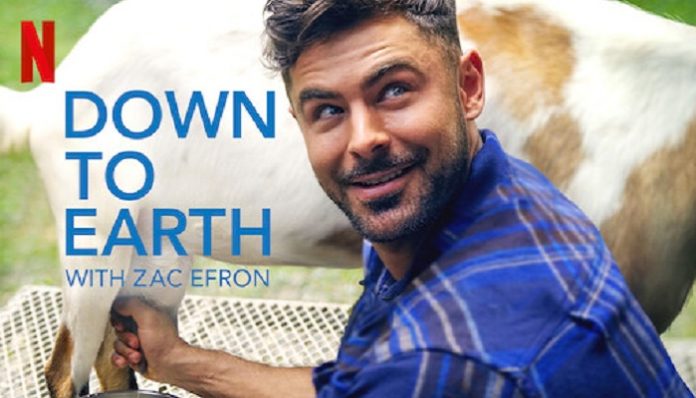 Most of us met Zac Efron as a hunky basketball player named Troy Bolton during his High School Musical days. But Zac is now older and still pretty hunky, but he’s doing something even better than breaking the status quo — and that’s learning how to save the planet in his show, Down To Earth.

In his new Netflix show, Down To Earth with Zac Efron, Zac takes us to different locations around the world with his food guru buddy, Darin Olien, to learn and teach different sustainable ways to live.

While we all know Zac Efron is a big star, he doesn’t give off that impression in the show. While Zac tries many different things, viewers get to hear his genuine reactions of “wow” or “sick.” It’s those genuine reactions that make the show and illustrate his amazement as he experiences new things with new cultures. As he goes around the world, learning the cultures and trying the food (one being an actual grub), he seems completely — wait for it — down to earth.

In these eight, one-hour long episodes, Efron and Olien go to different locations that honestly just live in more healthy and eco-friendly ways than the good ‘ole USA. Traveling to the different areas around the world, the two guys get to learn about things such as renewable energy in Iceland as well as the problem with littering and pollution in England. Moreover, they learn why it’s so important that the rest of the world try to adjust to these more energy-efficient ways.

Viewers are able to take this virtual and heartwarming journey straight from their couch, while also learning the importance of taking care of Mother Earth, which is a great perk!

Instead of just preaching the message to the audience, the show actually takes and shows you the problems the world is facing. What’s more, it provides some great solutions to those problems. It’s a great way to open our eyes and get the gears in our minds turning on ways we can help.

Learning how different areas of the Earth live in a world that is constantly changing is completely eye-opening. The show does a fantastic job of making its viewers consider questions such as, “Is this water actually healthy for me?” or, “What can I do to make a difference?” Especially important for Americans, it also poses the big question, “How can the United States learn from these other countries?”

The show really makes the viewer see more than our everyday lives in America. It also illuminates that our world really does need saving. And who better to get the word out than Zac Efron?

Featured image via Netflix‘s Down To Earth

5 Things You Should Know Before Moving In With Your Significant...