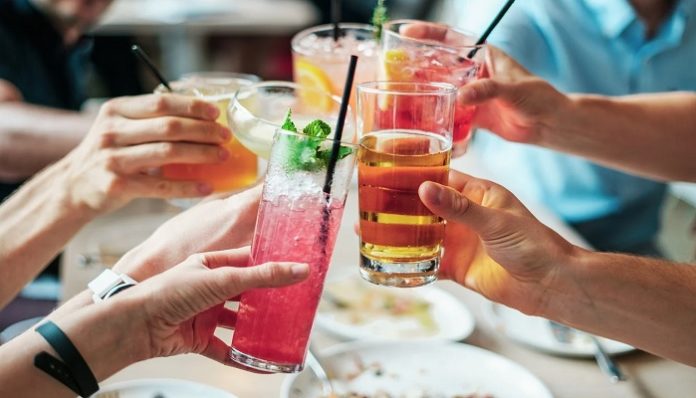 We’ve all made mistakes when it comes to alcohol consumption. Maybe it was during your 27th birthday when you wrongly assumed that you could handle four shots of tequila within an hour. (Raises hand.) Maybe you attended your best friend’s wedding where one glass of wine turned into three. During quarantine, maybe you’re drinking more than two glasses of wine as you binge-watch a Netflix series, resulting in a bad hangover.

As the adage goes, knowledge is power, and you should know how much alcohol your body size can handle. By keeping the effects of alcohol and tips for drinking safely in mind, you can still enjoy a cocktail while out with friends, a shot while out for your birthday, or a beer after a long day at work without worry.

Over the years, science has changed its opinion on how many drinks are safe for people to consume. Now, the CDC defines moderate alcohol consumption as 1 drink per day for women and 2 drinks per day for men. But that wasn’t always the case.

Having a few drinks a day was seen as good and even healthy for decades. According to a 2018 Vox article, the sense that drinking moderately led to better health outcomes came from studies that were paid for by the alcohol industry. They wanted to make drinking more favorable. The article also found that the idea of wine being a “health drink” and light drinking being healthy took off in the 1990s. Termed the “French Paradox,” researchers observed that French people — despite consuming foods high in saturated fat and frequently drinking red wine — had a low rate of cardiovascular disease.

In March of 2018, The New York Times published a bombshell story about five alcohol companies that helped fund and potentially design the study of a randomized controlled trial. Worse, it was overseen by the National Institute on Alcohol Abuse and Alcoholism. So it was a corrupted government study. New research on alcohol consumption from the CDC has shown that it is associated with a variety of risk factors. Some of them include cancers, motor vehicle accidents, increases in mental health problems, and violence.

So, how much is safe for you to drink?

We know that a variety of factors has an effect on how many drinks or shots an individual can handle. According to Healthline, sex, weight, age, underlying health conditions, and levels of alcohol metabolism as well as tolerance factor in. Ultimately, that concoction of factors determines whether you can only handle one shot tequila or five without a problem.

An individual with a higher body mass is more likely to have a lower BAC (Blood Alcohol Content) than someone with a lower body mass. Furthermore, younger people are less sensitive to the effects of alcohol consumption than older people. For those with underlying health conditions such as liver cancer or breast cancer, there is no known safe limit.

According to Healthline, a woman who weighs 120 pounds may see her driving skills diminish after 1 drink.

After consuming 4 drinks, her BAC can rise to a level of 0.15. This would make her legally intoxicated (the legal limit is generally 0.08). That same woman drinking 8 drinks can make her BAC rise to 0.30, which is potentially fatal. A woman who weighs 200 pounds can experience impairment after one drink and will need to have 4 drinks to become legally intoxicated (BAC of 0.09).

A man who drinks 5 drinks and weighs 160 pounds will see his BAC rise to 0.12, making him legally intoxicated. A man who weighs 240 pounds can see impairment with 1 drink, regardless of whether he’s having shots or cocktails. He will also have to consume 7 drinks to become legally intoxicated at 0.11. According to Very Well, in general, three or more drinks will produce negative results for men. Feeling heartened after drinking can make men not fully aware of how badly they’re impaired. Men have a biological advantage over women in terms of processing alcohol, due to differences in hormones and body composition.

No matter what, be sure to sip slowly. Stay hydrated between drinks and especially shots, and keep your personal limit in mind. Only then can you drink safely and enjoy the beverage of your choice. With these tips, you can enjoy life and the celebrations that come with it.