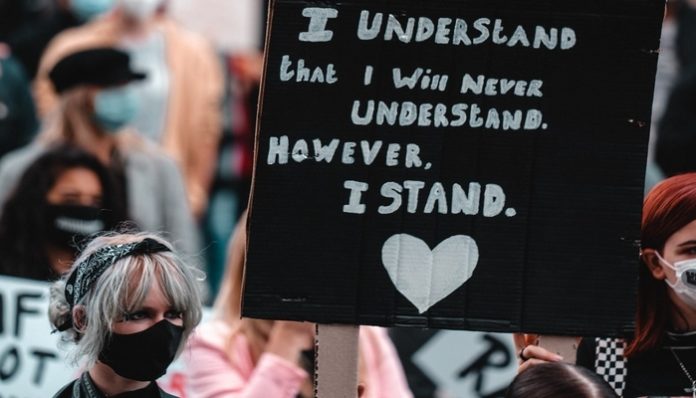 On May 25th, George Floyd, a black man accused of using a counterfeit bill to purchase cigarettes, was choked to death when police officer Derek Chauvin knelt on Floyd’s neck for nine minutes. Floyd’s heart-wrenching response to the brutality, replete with exclamations of “I can’t breathe” and cries for his mother, prompted a stunning show of nationwide support. Protests and demonstrations arose in cities all over the country. And people of all races have taken to the streets in the name of eradicating police brutality. But many White people have touted the protests as “dangerous” and “disorderly,” and that line of thinking is more harmful than a public demonstration will ever be.

Fellow White people, we need to be stronger allies.

As those who routinely benefit from this country’s institutionalized racism, it’s our responsibility to understand that right now, black lives do matter more than our own. We will never be the George Floyds, Breonna Taylors, and Ahmaud Arberys of the world. We’ll never be the innocent people who police kill daily simply for existing. We will never face the fear of being racially profiled as we drive through the neighborhood or walk through town. And we will never experience the deadly consequences of “living while black.”

So we should be mindful of the way we discuss the protests that are spreading through America.

We need to remember that the burning cars and buildings we see are the consequence of centuries of oppression that we have caused black Americans. The protests are a declaration that this country needs to ally with people of color in order to survive. But our lack of allyship in the past is directly responsible for the fear driving the protests. This is the same fear that White Americans have instilled in African-Americans since this country was founded.

We need to recognize that the way we speak about the protests can perpetuate police violence against black Americans.

Zeroing in on media reports of “looting,” arrests, tear-gassing, and closing businesses in the wake of the demonstrations only serves to perpetuate the notion that we need to fight against — the harmful stereotypes that African-Americans are “angry” or “violent.”

The truth is that much of the violence surrounding the protests occurs at the black community’s expense.

The protests wouldn’t provoke fear if they centered on a non-race issue or primarily consisted of White individuals. So we need to take great care to speak the reality of the Black Lives Matter demonstrations, not the perspective that absolves us from blame.

We need to dismantle our own racism and fully recognize our privilege.

Now more than ever, we need to read black perspectives and look inside ourselves to examine our viewpoints. We also speak out about the ways we can be unconsciously racist, even when the current racial climate makes us uncomfortable. The truth of the matter is that until we take responsibility for our actions, understand how to change, and do the work to see black struggles without making assumptions about the challenges the black community faces, we need to remain uncomfortable. Police kill black men and women at higher rates than they do White individuals, so we owe their community our discomfort.

We need to respect that now is not the time to cry “All Lives Matter,” praise our local police force, or justify our racism under the pretense of “having a black friend.”

To be effective allies, we need to acknowledge that police do treat us more humanely than they treat the black community. We also need to wash our minds of the idea that our lives matter most right now. To say that “all lives matter” is to remain colorblind, but now more than ever, we need to see color. Police brutality doesn’t affect us to the extent that it affects the black community. So as allies, we need to remain cognizant that this issue isn’t about us. And when we justify our colorblindness naming our black friends, we don’t acknowledge that we aren’t truly supporting them.

Instead of sharing perspectives that harm society’s progress in combating police brutality, we need to fully support the black community.

Reading up on the detrimental effects of colorblind thinking, recalling times we’ve promoted racist ideals, shopping black businesses, and donating to reputable organizations that support the Black Lives Matter movement matters. These steps mean far more to the black community than complaining about “looters” or posting a black square on Instagram. Our actions need to be mindful, intentional, and indicative of our plans to change police brutality against African-Americans.

Fellow White people, now more than ever, we need to be stronger allies to the black community. We need to acknowledge our responsibility in promulgating racism and truly acknowledge black struggles in America. We need to speak to the damage our colorblindness has caused and shatter the racist ideals we’ve believed. And we need to take steps that consciously spark social change. The black community is losing innocent lives at the hands of our officers. So it’s our duty to show active, tangible support for the cause. As allies, we must stand alongside the black community to build an America in which Black Lives Matter.