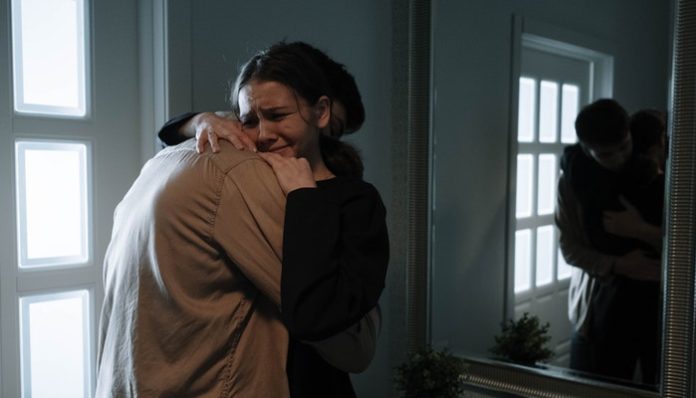 The moment I found husband dead on the floor happened like this: Henry’s footsteps on the old wooden floorboards. The toilet flushing. More footsteps, perhaps on the stairs. Silence. Then the thud.

I was working downstairs in my office on a bitterly cold Wednesday afternoon. My workspace was an enclosed sunporch off our living room, the small-paned windows on three sides framing a view of the snowy hills across the road. Wrapped in a shawl, wearing fuzzy socks on my chilled feet, I continued studying the project on my computer screen.

Henry had been sick in bed all morning.

The rooms were silent as I ran up the stairs, calling for Henry. Two of our four cats skittered out of my way, their nails clawing the wooden treads. The bedroom was empty. I raced back down the stairs.

I found Henry on his back, spread-eagle on the kitchen floor, his head a few inches from the oven broiler. He was still breathing. His body was silhouetted against the sea blue of the painted floorboards. I imagined the outline of a police chalk drawing of the victim at a crime scene.

He inhaled with a shallow breath; small dribbles of saliva on his curved lips, the skin on his face now sallow and ashen. He exhaled with a feeble sigh. His eyes flickered half open. I spoke to him to let him know that I was there with him, but for once in our life together he couldn’t speak back.

A long elastic minute stretched out and snapped: Is this when people call 911? Or is Henry going to sit up and tell me to stop fussing, like he did yesterday after he passed out? This must be the same thing. He came in after taking out the garbage and fell down flat on the floor. The doctor said all the tests were normal.

I called 911. I sat down on the floor next to him stroking his forehead, watching him breathe. A hissing sound as spittle pulsed between his lips.

I called 911 again, just to be sure. I called Emily who lived five minutes away and was usually home at two in the afternoon. Anna was more reliable; I knew she wouldn’t freak out, no matter what happened today, but she lived twelve minutes away. Then I called Matthew, Henry’s best friend, who lived with his wife in a nearby town.

I sat back down next to him on the blue floor stroking the familiar wrinkles, the scar over one eyelid, the small mole at the crest of one cheek.

Inhale. Exhale. A blue gauze curtain passed over him. His skin turned to wax.

“Breathe!” I screamed at him. “Start breathing now!” I pounded him on the chest.

He wasn’t listening to me. I placed my mouth on his and blew my breath into him; the blue briefly faded into rose like a watercolor wash. But the flush faded back to blue. He was still. The man who for sixteen years had loved me, driven me crazy, fought with me, fed me, made love with me, made a baby with me, exhaled one last breath, the air I had blown into his lungs.

I looked up, distracted by the sound of the sliding porch door, followed by a blast of cold air. The EMS guys had arrived with a gurney and gear and gently hustled me out of the kitchen. Emily followed right after them.

You’ll know it’s bad when they take you to the little waiting room. Emily held my left arm. Her face was pale, her lips still rosy from the cold, her dark bobbed hair peeking from under a familiar blue cloche hat. Matthew sat on my right.

The sad-eyed young doctor told us it was a pulmonary embolism. A blood clot formed in the leg had moved upward and lodged in the lung, causing cardiac arrest. They had tried everything they could to revive him.

Everything moved in slow motion as I processed his words. This couldn’t be right. Whenever we’d watched Six Feet Under together, the main characters made it safely to the next episode. I slid off my chair to the floor and screamed.

“You can lie next to him if you want,” Emily offered. She was calm, amazingly, looking at Henry’s lifeless body on the gurney. “Go ahead, it won’t bother me at all.”

I climbed up onto the narrow gurney and lay down next to him. He would have wanted me to note every detail for him in my grief — the way his chest was still warm, while his arms were already stiff and cold, and his fingers were curled and blue. He had a bruise on the left side of his face. It was comforting to rest there with my arm around him, touching him in a familiar way, relieved still to have a companion, even a quiet one.

Two nurses came in. “You should go home now and get some rest,” one said. She put her hand on my shoulder, squeezed me gently.

Emily took my arm and we walked down the fluorescent-lit corridors and stepped out into the twilight, a remarkable sky of inky blue with low hanging clouds. A flock of black birds rushed up into the sky, their wings moved in unison, a tragic banner.