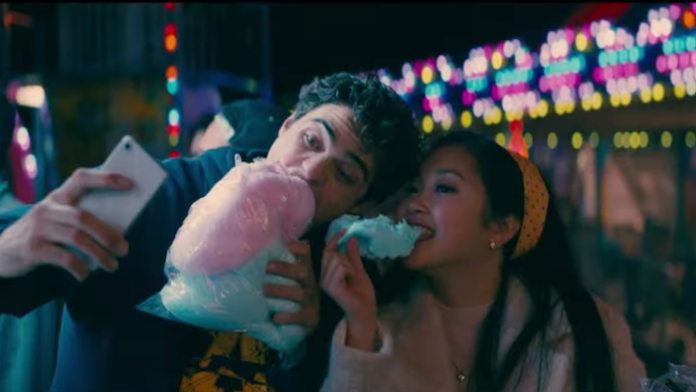 Love and romance are the main plotlines of many films. They’re also constantly on our minds. So, if you’re feeling like laughing, crying, or simply enjoying a good rom-com, here are 7 romantic comedies coming to our screens this year. Some even in time for Valentine’s Day!

What it looks like from the trailer is that things between our stars, Lana Condor as Lara Jean and Noah Centineo as dreamy Peter, are going terrifically! A fancy dinner date, pretty jewelry — it seems like Lara Jean and Peter are #endgame. And, (gasp!) do I see Lara Jean rocking a cheerleader’s uniform?

However, just as things are starting to look pretty official between the two main characters, a blast from Lara Jean’s past reappears. John Ambrose McClaren, played by Jordan Fisher, is a yet another recipient of Lara Jean’s love letter. It looks like sparks might be flying between these two. But what does that mean for Lara Jean and Peter?

Just in time for Valentine’s Day, To All The Boys I’ve Loved Before: P.S. I Still Love You is set to release on February 12th, 2020 on Netflix. This is one of many great romantic comedies you don’t want to miss.

Based on a Jane Austen novel of the same name, Emma follows the story of beautifully clever and wealthy Emma Woodhouse (played by Anya Taylor-Joy) as she meddles in the affairs of her family and friends as a self-proclaimed matchmaker.

Kristen Stewart has come a long way since her Twilight days. And her role in Happiest Season definitely shows it! This LGBTQ+ friendly romantic comedy tells the story of Abby (Stewart) and her girlfriend Harper (Mackenzie Davis) while home for the holidays.

Abby wants to propose to Harper at her family’s Christmas party. However, much to her surprise, her girlfriend has yet to come out to her conservative parents. Uh oh!

Currently, Happiest Season is in pre-production and there is no trailer available, so keep your eyes out. It is planned for a late November 2020 release and is a highly-anticipated addition to the world’s inclusive romantic comedies.

On the road to a breakup, a young couple (Issa Rae and Kumail Nanjiani) accidentally become involved in a bizarre murder. Hilarity ensues as the two work together to figure out “whodunnit” before the police catches the wrong guys.

With an impromptu break-in involving a teenager and a bean bag chair, the wonderful Anna Camp and a horse, and a scene right out of The Handmaid’s Tale, this romantic comedy turned thriller will be sure to have you laughing out loud.

After raving success of Hustlers, the stunning Jennifer Lopez will soon be back to the big screen, starring in a rom-com Marry Me.

Lopez stars as a famous pop star who has been stood up by rockstar fiance moments before her wedding. So she marries a random guy from the crowd instead. Owen Wilson, of Wedding Crashers, has been announced as her co-star so we’re definitely in for a wild, hilarious ride.

Marry Me is still in post-production so there’s no release date, but it is expected to be on the big screens in 2020.

Post-apocalyptic fiction is still a super popular industry and it won’t slow down any time soon. Monster Problems brings the end-of-the-world doom that we love with a touch of romantic comedy. Best of both worlds, right?

In order to be with the woman he loves, a young man named Joel (Teen Wolf star Dylan O’Brien) must survive a monster apocalypse, enlisting the help of a skilled hunter along his way. Other actors starring alongside O’Brien include Jessica Henwick and Michael Rooker.

Who says you can’t find love during the apocalypse? Find out on April 17, 2020 when Monster Problems comes to theatres.

Midwestern besties Barb (Annie Mumolo) and Star (Kristen Wiig) have the adventure of a lifetime when they finally decide to leave their small town and travel to Visa Del Mar, Florida. Romance (by ways of Fifty Shades star Jamie Dornan), friendship, evil villains… As you can imagine from previous Wiig films, the craziness will ensue.

These 7 new romantic comedies will definitely be great for a date night with your SO or your best friends! Which one of these are you waiting for the most?

When You Are Torn Between Your Boyfriend And Best Guy Friend