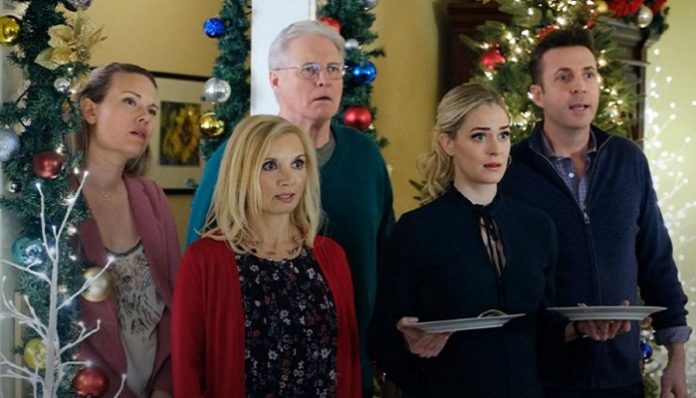 We’re all a little embarrassed to admit that we watch Hallmark’s never-ending marathon of Christmas movies year after year. Sure, it’s not the worst thing we could do. But there’s something about them being so damn addictive that we don’t like to vocalize.

No matter how cheesy, predictable, unrealistic and romantic they are, we can’t help but get sucked in movie after movie. But there’s one big reason we find ourselves loving these movies. And a lot of people haven’t really been able to identify it yet.

Hallmark’s movies are always cast extremely wisely. That’s their strategy, and they’ve always stuck with it.

For starters, they have assembled quite a line-up of actors and actresses they regularly use. Candace Cameron Bure, Danica McKellar and Lacey Chabert (aka Gretchen Wieners) are the main leading ladies. Whereas Brennan Elliott, Luke MacFarlane and Andrew Walker are dominating the male cast.

For almost all Hallmark’s movies, you’re guaranteed to find an actor or actress who has been in another movie before. Sure, they have the odd new lead every few premieres per year, but it’s not often. They love sticking with a familiar face even if it means seeing the same actor star in 7 movies in a row.

Going along with their familiar face tactic, they also thrive on getting the former child star or the teenage heartthrob. The nostalgia factor is probably the most common one now and it doesn’t seem to hurt them either.

In recent years, they’ve also tried to find former teen heartthrobs from the mid-2000s in hopes of bringing new viewers from a slightly younger age demographic. Jesse Metcalfe and Chad Michael Murray are the two newest male faces to the Countdown to Christmas franchise and are both currently filming for next year’s roles already. Sure, we knew Jesse was a great jock/party boy in the past, but as young adults, we love watching the romantic side of him which he never really portrayed ten years ago. It’s like our childhood crushes have matured and now we have matured crushes on the same people.

While other networks are desperately trying to stick with revivals to capitalize on the trend and because they’re trying to relive the former success due to a lack of current hitmakers, Hallmark’s movies don’t care to follow that trend. Sure, they’re going for star power, but they are more focused on finding good talent and utilizing it for as long as they can. Once they have a strong leading cast, they couldn’t be bothered with getting other big names to join the cast.

In addition to their smart casting choices, they also have a typical role for each actor to play. For example, Candace Cameron Bure always plays the go-getter stuck in a small town who finds love. Whereas her former Full House co-star Jodie Sweetnin is the goofy, clumsy and awkward girl who’s just trying to make a living. These are very similar to the types of characters they used to play on TV back in the day. Chad Michael Murray always plays a writer or artist of some sort, highlighting the desirable quality in his character Lucas Scott, which caused girls to go into a frenzy. They give people the character types that made them successful before.

All in all, they love creating traditions and celebrating family.

The environment they create within their movies is what they want the viewers to experience. And the viewers want what the actors have – a safe and loving community. They have an astonishing ability to recreate the same magic in every single movie, regardless of which television star is in it.

There’s a reason the network is celebrating their 10th anniversary after being the highest-rated cable channel in the fourth quarter. They have their cheesy qualities and over-abundance of reusing the same core group of actors and actresses, and they don’t care what critics say. Their ratings do all the speaking they need to. And if it isn’t broken, why fix it?