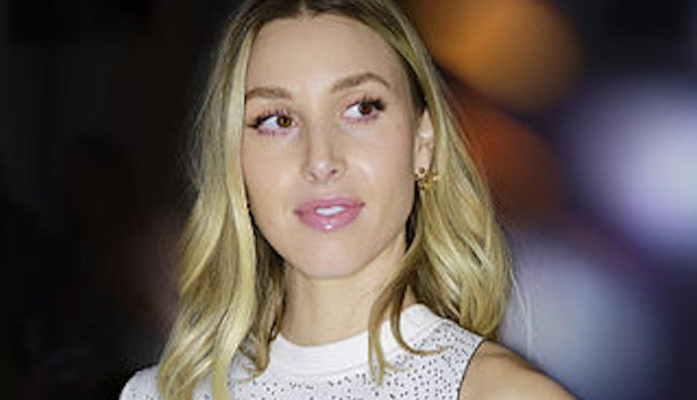 Whitney Port is one of the most influential women in the game right now. She got her start as a main cast member on MTV’s The Hills and has since had a career working for Teen Vogue, managed million-dollar fashion companies, created her own lifestyle brand, maintained a popular blog, started a family, and is back on reality TV.

In addition to her busy schedule, Port has also began her own podcast “With Whit” along with her best friend Andrea Cuttler. Every episode contains everything from life hacks to gossips and chatting about life. However, this week Whitney spilled the tea about a potential hook up from her past.

The Hills alum claimed that she turned down a one night stand with Leonardo DiCaprio almost 10 years ago.

In the newest episode she and Andrea reminisce on the night where they met Leo and Rihanna – and to say it was wild would be an understatement.

“I have been dying to tell people this story for ages. I feel like whenever I tell it to friends, no one believes me,” she says at the beginning of her intriguing story.

As she explained to the audience, the two went to talk to Rihanna (as one does at fancy Hollywood events) when Leo introduced himself to Whitney. Moreover, he even claimed he was a huge fan of The City, aka Whitney’s spinoff show after she left The Hills.

Now, if this was me and the man of my dreams was telling me he even knew I existed, let alone watched a show about my life, I would have been on the floor dead because I’d be so starstruck and in love.

Andrea went on to explain, “And then Leo comes up to you to also… insinuated that, like, he had missed the week priors episode. And you’re like, is he telling me that he watches The City? This is confusing, but also incredible.”

Next, they exchanged numbers and the two ladies joined Leo and his friends at another club. I know, this sounds like a fan fiction, but I’m completely immersed in this story.

Andrea then explained that she was respecting girl code as the night went on. “I remember dancing alone on the dance floor because you were in the corner talking to him and I didn’t want to intrude, but also like couldn’t leave.”

(And we always thought Whitney was the good friend… This Andrea girl sounds like an MVP!)

Sadly the night came to an end and the two parted ways. Nevertheless, they talked on BBM for around six months before they eventually met up in Los Angeles.

Now, this is where it gets good.

Then Whitney shared the most confusing part of the story in precise detail.

She explained, “I was too nervous. I had never had a one night stand. I didn’t want to be with him alone.”

That’s every girl’s dream and she just wasted a golden opportunity like that? I personally could never, but that’s just me and half of the female population.

She added, “I was way too nervous to do it and then I lost my chance and it’s really one of my bigger regrets in life.”

Meanwhile, fans of hers around the world are sitting here like…

This story has a seriously depressing result but I’m actually proud of her for following her gut instincts. There’s nothing wrong with not doing something you aren’t comfortable with.

Eventually, she went on to get married to Tim Rosenman in 2015 and the two have a son named Sunny who was born last year. So life seems to still be going pretty well for her. Luckily, this reveal didn’t end her career.

But you know what, I totally could have seen an actual relationship between Leo and Whitney work. He’s a classy and sophisticated man with enough professionalism and charm to have impressed Whitney. Meanwhile, she’s an extremely ambitious, mature, and classy woman who would have kept Leo in line and inspired him to do more. They seem very compatible and and matching each other’s personalities very well. Plus, she wouldn’t have been intimidated by his fame and attention since her own stardom hasn’t affected her either.

“If you didn’t think I was cool, now you probably do,” Port bragged towards the end of her story, giggling at the unfortunate ending.

Well Whit, I do think you’re cool. But I also think that you’re an idiot for blowing this opportunity. With that being said though, thank you for saying ‘no’ so we can all try to get a chance with Leo now.