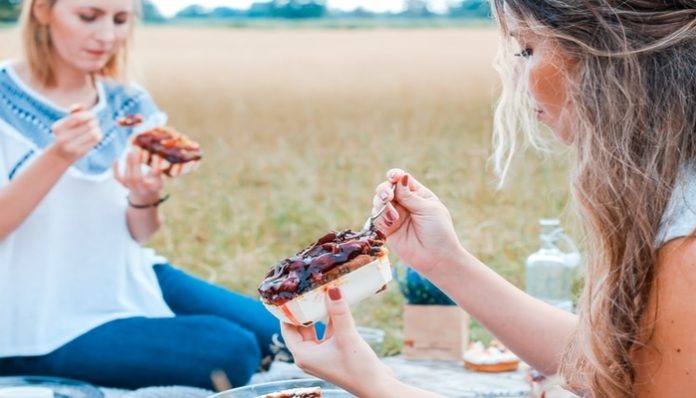 Our society is rife with diet culture, which can be confusing, overwhelming, and detrimental to our health and well-being. But after struggling with disordered eating when I was younger, I discovered a food-positive motto I wish I had known far earlier:

Keep your eyes on your own plate.

When I graduated from school, there were so many concerns on my mind. How would I cope with living on my own? Would I be able to balance my budget well? Should I apply for a work visa on top of my study visa, or should I just focus on my degree? However, all of the advice I received from other adults around me seemed to focus on one idea alone:

The female members of my family were especially pushy about diet and weight. The sooner my departure for college approached, the more the stories kept coming. So-and-so’s daughter lived off pizza, and she got fat! So-and-so never learned to cook ,and you won’t believe how she looks now! It didn’t matter that I enjoyed cooking and swimming. It didn’t matter how many times I asked my family to trust my judgement. All I got in response was a dismissive “It’s just banter! Don’t take it so seriously!”

Then there were the more insidious reminders of diet culture: congregating around the scale, every time my family visited. The loud exclamations whenever higher-than-expected numbers popped up. The ways my family tried to get me to participate in their dangerous game. The ways in which they reacted to my own weight fluctuations (which, I came to learn, were in line with my age, hormones, and body type).

Then I went to college, and to everyone’s surprise, I stayed the same as I always had been. My enjoyment of cooking did not go away, and neither did my passion for swimming. But there was a darker undertone to my actions now. I consumed feminist literature at ridiculous rates, soaking up The Feminine Mystique, Fat is a Feminist Issue, The Beauty Myth, The Equality Illusion and countless blogs and body positivity campaigns. Still, I could not switch off the voice in the back of my head that urged me to count calories and scrutinise menus. I felt guilty when I didn’t exercise. I felt bad every time I ate sweets.

But the worst part was my habit of scrutinising other people’s plates.

I’d ponder their food choices to see if I could do “better” or check if I was being “bad.” Eating out was a performance. Dare I order dessert with my crush sitting right next to me? Were my friends going to judge me for choosing fries instead of a salad? My family said that they didn’t like people who were finicky about their food, but they were also judgmental of our fat friends, so I didn’t know what to do.

“What would they say about my food?” I wondered.

Would my family find fault? Did they make fun of me when I wasn’t around? The anxious thoughts ran through my head like the Duracell bunny.

Eventually, I had to stop restricting my food choices. I had become sick and weak. I had destroyed relationships. The people whose opinions I had cherished were no longer part of my life.

But changing my relationship with food was hard, and it didn’t happen at once.

Ultimately, focusing my eyes on my own plate, even when I felt like others were scrutinising it, is what helped turn the tide. I slowly learned to accept that I could not control what the world at large thought about my food habits and what was on my plate. I realized that the people who mattered would never judge me for my body. I found ways to tolerate my female relatives and their obsessions with the scale.

Still, the voice is in the back of my mind, counting steps, counting calories. But I always keep my eyes on my own plate so that it has no room for comparison.

Maybe one day, I’ll come to accept that voice, too.

A Poem For The Broken-Hearted Person Whose Mind Is Racing