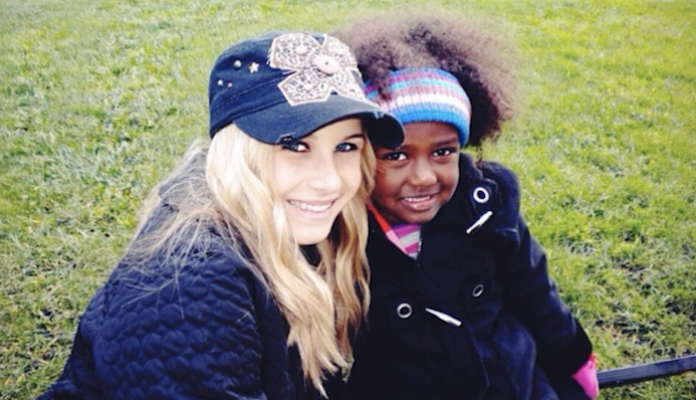 My sister stands out in our family. I have straight blonde hair, she has curly black hair. My parents, brothers and I have light eyes, and she has brown eyes. I have white skin, and she has black skin. You get the picture – she was adopted. Eleven years ago, I met my favorite person. Gracie came from Ethiopia to be my sister and part of my family.

Truthfully, life before her was a blur. All the good memories I have of my childhood involve my little sister. As I’ve grown older and have had a chance to reflect on those early years with Gracie, it has become evident that transracial families have it a lot different than those with family members made up of the same race.

Transracial adoption in the U.S. is not a new trend, but the term itself is not widely known yet. Basically, it is when adoptive parents take in a child of a race other than their own.

If you know someone who has adopted, or have even considered it yourself, you may have discussed race and ethnicity as a factor that you simply don’t care about. When people dismiss race and ethnicity on the topic of adoptions, then tend to say this with the best intentions in mind, but the reality is that race and ethnicity do matter. To ignore your child’s race would be to deny them a part of their culture – a topic that will undoubtedly come up in their lifetime. My family certainly thought about race and ethnicity when we first brought Gracie into our home. We approached adoption thinking that good intentions and love would be enough. Although the past eleven years have been filled with countless blessings, there have been incidents for which we were simply not prepared:

“A black child should be raised by a black parent.”

“You should send her back to her own country.”

These statements weren’t said out of love, they were said out of ignorance and hatred. However, for each offensive comment that was said, 20 more loving comments  followed. It took a while to figure out what we were doing (and we are still learning), but my family has been able to look past the animosity and focus on what truly matters — love.

Today, the number of orphaned children is at an all-time high, and I strongly believe we must all do what we can to address this prevalent issue. I am NOT suggesting everyone should adopt a child. However, there are so many other steps we can take as individuals to shed light on this wide-ranging epidemic. Here are a few examples of how anyone can help:

While this is a difficult topic to discuss, I strongly believe that our generation can not only make an impact on our own communities, but also in other states and across the globe.

Don’t Let Someone Make You Feel Guilty About Their Mistakes

The Top Reason Most Relationships Tend To Fail