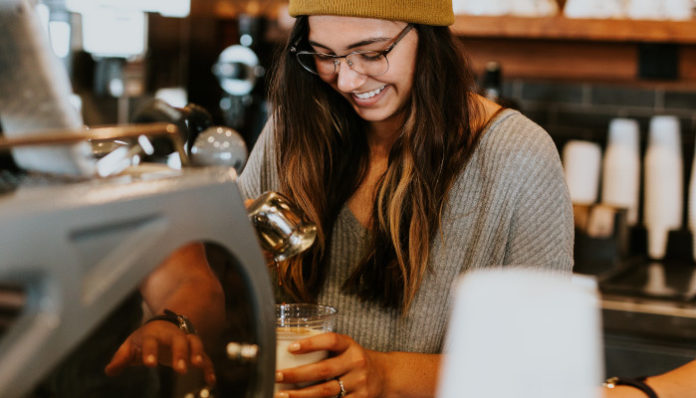 Do you flash fake grins at customers or coworkers? If so, listen up: those phony flashes of your pearly whites may be the reason you wind up at the bar once you’re off the clock.

According to a recent study, employees who force themselves to smile at work fall risk to unhealthy drinking habits.

Researchers at Penn State studied the alcohol consumption of service industry employees. Turns out, there’s a direct link between those who faked or amplified emotions, like smiling, and heavier drinking after hours. The same connection occurred with those who suppressed negative responses, like eye rolling, as well.

Researchers conducted phone interviews with over 1500 men and women from a variety of backgrounds. The participants provided information about surface acting at work, alcohol consumption, impulsive behaviors, and feelings of autonomy at work. Data showed that, in general, those who work in direct contact with the public drank more after work. Employees who surface acted more frequently also claimed to drink more than those who were genuine more often.

Does this information ring true for you? If so, you aren’t alone.

Psychology professor Alicia Grandey said, “The relationship between surface acting and drinking after work was stronger for people who are impulsive or who lack personal control over behavior at work. If you’re impulsive or constantly told how to do your job, it may be harder to rein in your emotions all day, and when you get home, you don’t have that self-control to stop after one drink.”

Other previous studies found increased alcohol consumption with service industry employees, but this is the first research study to shed light on why teachers, nurses, and customer service professionals tend to turn to alcohol in higher numbers.

“Faking and suppressing emotions with customers was related to drinking beyond the stress of the job or feeling negatively,” Grandey shared. “It wasn’t just feeling badly that makes them reach for a drink. Instead, the more they have to control negative emotions at work, the less they are able to control their alcohol intake after work.”

Not only does your brain know the difference between genuine and insincere smiles, but forcing yourself to display positivity for hours exhausts you. We only have so much self-control, after all. I also know that personally, pretending everything is fine typically makes me feel worse.

Sounds like we may need to reconsider that timeless concept of “service with a smile,” huh?

Only time will tell if this research impacts service industry standards, pay, and expectations. This research could also be carried into other areas of life, like relationships and family gatherings. Whether you work in retail or education, though, this information is incredibly valuable.

Note: If you or someone you know is struggling with alcohol addiction, help is available. Know the difference between enjoying a few beverages and a potentially fatal problem.