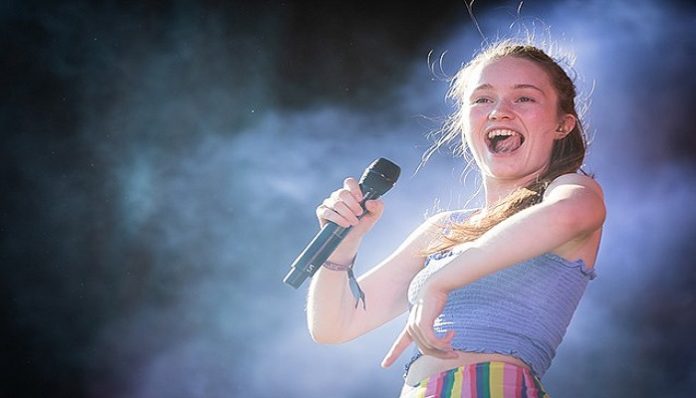 Sigrid (Sigrid Solbakk Raabe) is a Norwegian pop singer-songwriter. She’s known for her quirky music videos and slightly raspy yet completely captivating voice. Her infectious pop hooks still manage to retain a distinctly down-to-earth sound that’s been missing from the pop scene. After performing in Norway for three years, she signed with Island Records in 2016. Shortly after, she released her debut single, “Don’t Kill My Vibe,” which helped her gain international recognition.

She was featured in Teen Vogue’s “Raise Your Voice: 10 Female Artists Who Are Changing the Music Game,” alongside Maggie Rogers.

“Don’t Kill My Vibe” is a self-empowerment anthem that Sigrid wrote after a recording session during which an older producer told her she wasn’t good enough.

Her story and lyrics resonated with young women in the music industry, especially those who felt like older men condescended them and doubted their creativity just because of their age and gender.

Although critics praised “Don’t Kill My Vibe,” some assumed Sigrid was just another one-hit wonder with a trite self-empowerment message.

However, her November 2017 single, “Strangers,” added credibility to her artistry and proved that she has what it takes to craft memorable, heavy-hitting pop songs that still retain a sense of authenticity.

Although Sigrid has a reputation for being a clever songwriter, her lack of complexity may not appeal to people. Some expect her to have a more sophisticated writing style. However, Sigrid never aspired to become a lyrical master. She’s just here to be her energetic and quirky self on her upbeat songs and show a more pensive, vulnerable side on her personal piano ballads. Her lyrics are honest, simple, and direct, but she still writes them in a way that’s entirely her own.

There is nothing quite like Sigrid’s synth-pop sound. With her upbeat songs, the synths feel light and airy. The sudden bass drops and powerful beats add a heavy-hitting force that makes her songs climactic, insanely catchy, and danceable. In her ballads, Sigrid delivers a more soulful sound, laden with deep emotions. Sigrid is a versatile artist who proves that she can write catchy lead singles as well as serious, heartfelt ballads.

Along with relatable lyrics and authentic musicality, Sigrid’s personal presentation sets her apart.

There’s significant pressure for new pop singers to look and act a certain way, but Sigrid stands out because of her plain, unassuming demeanor. She typically dresses in a big t-shirt, jeans, and sneakers and prefers to stay bare-faced. She doesn’t do anything drastic or fancy with her hair, either. Sigrid chooses comfort over ostentatiousness, even as a rising singer in the pop world, which is why fans love her – she’s unapologetically herself.

As a whole, Sucker Punch is a solid debut album from an artist who dares to be as simple as she pleases, but does so in a deep, authentic way. Sigrid’s air of effortlessness has won the hearts of fans, especially Millennial women, who desire nothing more than to be happy in their own skin.

Hear the full album below, and comment to let us know what you think!

Why I Finally Believe You Can Actually Be Friends With Your...

How White Supremacists Give Paganism A Bad Name