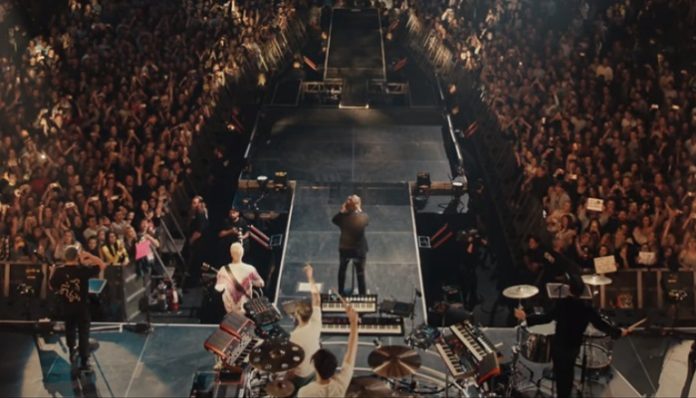 5 Seconds of Summer and The Chainsmokers did not disappoint with their new song release today! The new song, “Who Do You Love,” features catchy beats with darkly beautiful lyrics, and I can’t stop listening.

The Australian pop group released an epic teaser via twitter yesterday. It featured the group walking through a darkly unadorned desert landscape. Bandmate Ashton Irwin then says to a handheld device, “Alexa, follow The Chainsmokers on Amazon Music.”

With digitized gusts of wind, the 5 Seconds of Summer video gives of a super techy vibe.

The Chainsmokers shared a much more basic teaser, though.

Drew Taggart and Alex Pall sat in a recording studio seeking inspiration, Pall mentions 5SOS is his “vibe right now,” and in turn Taggart instructs his Alexa to “follow Five Seconds Of Summer.”

These teasers clearly meant one thing, a collab was coming.

Fans anticipated the single, and to our surprise it dropped today! Considering it hasn’t even been out for 24 hours, we are all already obsessed!

What’s even more interesting is that all six respective band members all were credited as writers and producers, proving that this was a 100% hands on collaboration between both bands.This is something so unusual in the music industry that doesn’t always do well, but this is exceeding expectations and already getting tons of air play on the radio.

You can listen to the full song here.

Oh, and The Chainsmokers already confirmed that this secretive single already has a music video.

Listen to the Chainsmokers collab with the fine fellas of 5 Seconds Of Summer and let us know what you think in the comments below. They are def who I love right now.

My Ex Dropped Me At The Airport And Then Ghosted Me