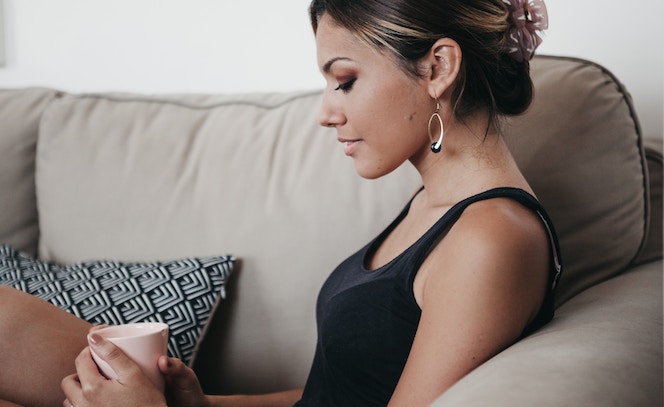 It was a taboo part of my body that I could never bring myself to look at.

I always knew I had a vagina, but it felt like a taboo part of my body that I could never bring myself to look at. I mean, I got my period, but other than that, my vajayjay and I were merely acquaintances.

I’d shy away from tampons in preference of a trusty, non-invasive pad that helped me maintain my cool distance every time that I got my period. But I knew that coming face-to-face with that little, cotton bullet was imminent. A rite of passage.

One night after school, I laid an old towel down on my bedroom floor. I tried to make the most of an uncomfortable situation. I took off all my clothes and ripped open a fresh box of tampons. Clutching the thing tightly in my fist, I was a woman on a mission. I laid on my back, fighting to get the tampon inside my body, but the discomfort overruled all of my determination.

I felt violated and began to weep.

Why couldn’t I do something so many others seemed to do with ease? I was a freak.

By the end of my final year of school, I had my first boyfriend. It was summer, and love was in the air. I was a virgin and thought about the looming prospect of sex. We figured out that penetrative sex of any description was not on the cards for us.

After many late nights of desperate Googling and expressing my anxieties to friends, I decided to confront the problem, and see a doctor.

And that’s exactly what happened.

I confided in a kind female GP, who asked me to lie down so I could be properly examined and managed to gently insert a finger. I was relieved. It was the first time I’d been able to get anything in there.

In my extensive online digging, I had discovered “Vaginismus” – a condition I didn’t know much about but that seemed to fit with my experiences, so asked her if I fit the bill, and oh-boy, did I.

As we ran through the list of symptoms, I ticked off each one; difficult or impossible penetration of the vagina because of tightening muscles? Check. Burning and stinging pain when anything – be it a tampon, penis, or anything in between – is inserted into the vagina? Oh yes. Intense fear of penetrative sex? You betcha.

For some reason, my body had learned to associate vaginal penetration with pain. Even though I was consenting to, and wanting, sex, my vaginal muscles would tighten to “protect” me. To understand what it’s like, you can point your finger and slowly move towards someone’s eye and watch their eyelid instinctively shut. I knew I needed to unlearn this defense mechanism if I ever wanted a healthy sex life.

Turns out Vaginismus is just as much a mental condition as it is a physical one.

It’s linked to anxiety, and overcoming it requires retraining your brain. Attempting penetration with Vaginismus is often described as feeling like you’re “hitting a wall”. So it was physical and mental? Great.

I went online and ordered The Complete Vaginismus Treatment Kit, which included a workbook, instructional DVD, and dilator kit. Pushing any skepticism aside, I proceeded to diligently work my way through the exercises, which included recounting family history and any preconceived notions of sex. I would always read aloud my entries to my boyfriend, no matter how cringeworthy it was. I thought it would somehow help. We cuddled up in bed one night to treat ourselves to the DVD which was basically some intense 80s bush and full-frontal vagina shots and cheesy, scripted dialogue. We never made it to testing out the dilators because after reaching the ninth exercise (which involved a f*ck-load of Kegels), I had sex for the first time!

It was an ordinary afternoon, and my boyfriend and I were lying on my bed, reflecting on all the work we had put into conquering this thing. He asked me how I would like to lose my virginity. One thing led to another and, minutes later, we were fooling around, and it just happened.

I was finally able to have penetrative sex.

The feeling was pure euphoria and accomplishment. I kid you not, I was skipping around the house. I messaged all my friends. You could not wipe the smile off either of our faces.

It’s now more than three years later and we are still together, and still having sex. My anxieties about sex, Vaginismus, and my body still rear their ugly heads from time to time but as soon as I realized painless sex (not to mention pleasurable sex) was possible, there was no turning back.

Photo by Candice Picard on Unsplash