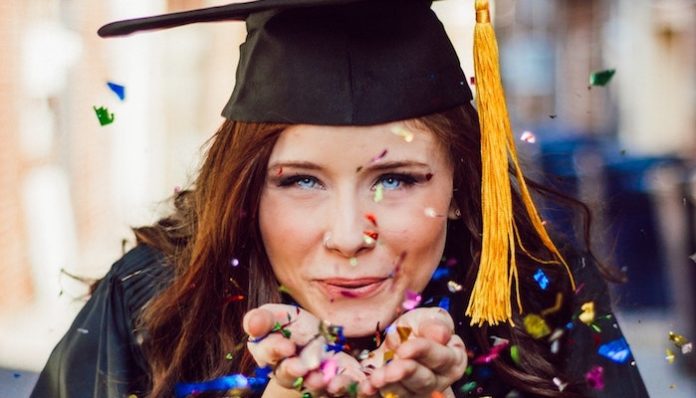 Graduation is coming and you’ve got one chance left to impress people – if not right now, then a few years down the line when they look back through their yearbook. But what can you write? I mean, ‘peace on earth’ and ‘happiness for all’ are a bit staid, don’t you think?

But coming up with something like that is not easy. So, what to do? Well, one option is always to – uhm – borrow. Of course, if you do that you might, well, get found out (and if you’re borrowing for the yearbook they might decide to check if you borrowed for your tests as well.

But then, you don’t have to take it wholesale. Maybe what some clever student before you came up with will inspire you to even greater heights! To that end, we’re not just going to look at some good captions but do a quick analysis of why they work. Then you can turn that to creating something of your own. And possibly, in a few years, it might well be you who gets included in a list like this.

“The Tassel Was Worth The Hassle.” — Unknown

As your English teacher has been trying to tell you for the last four years, rhymes work. They give a certain rhythm to your words that can make even something relatively mundane and unimportant becomes significant.

Of course, you’ll want to pay attention as some rhymes are so obvious they won’t provoke a laugh but an eye roll. “Don’t Tell Me The Sky’s The Limit When There Are Footprints On The Moon.” — Paul Brandt

A lot of humor and interesting sayings are about re-interpreting things that people take for granted. A good example of that is the sentence above, which takes one of those mundane clichés, puts it under the microscope and shows that it doesn’t go far enough.

Of course, that works especially well with this saying as obviously when you’ve just graduated what matters is what you aim for. Perhaps, then, it’s time to re-explore some similar sayings and see if you can’t reinterpret them?

“This Wasn’t Like High School Musical At All.” — Unknown

We all know that high school is hard. A thousand and one articles have been written about it. Most teenage TV shows talk about it and then there’s that graduation speech. It is, in other words, nothing like high school musical.

That’s at the heart of what makes this quote funny. It’s tongue in cheek and reflects back on the person who said it. It’s actually a little bit dark, as it tells a story about an experience that might not have been as picturesque as it’s made out to be.

Often, the most powerful things are the things that aren’t being said.

“What lies behind us and lies before us are small matters compared to what lies within us.” — Ralph Waldo Emerson

No humor here. Just an observation about our potential, our beliefs and our aspirations. You’re probably going to struggle to find something on your own that’s meaningful like this. Of course, you’re welcome to try.

If it turns out to be a struggle, don’t be afraid to turn to famous quotes and find something that you feel is truly inspirational. Just do two things when you use it. First off, check it, because sometimes a phenomenal quote becomes a cliché simply because it’s been used too often. Secondly, give credit. It’s too easy for people to figure out you stole a famous quote without attributing and it doesn’t make you look good.

“Chaos, panic and disorder. My work here is done.” – unknown

Another good option, of course, is to reflect back on who you were (or who you tried to be). Were you the school rascal? Then having people remember that through your quote can be a good way to leave a lasting impression.

There are a lot of quotes out there like the above one.  Your best bet is to simply adjust it. You don’t immediately have to hire a writing service like Trust My Paper to help you create it.

“Now, it’s hotter in here by one degree.” — Unknown

Okay, it’s a pun. Not everybody can appreciate those. At the same time, a clever one can invoke a groan while at the same time provoke admiration. The way to find a pun you might use is simply to go through all the words related to graduation and see if any of them has a second meaning that can be used in some (slightly naughty) way.

Admittedly, it might take a while to find one you’ll like, but it could well be worth it. Because a pun like this will cause people to smile today and years from now as well.

People will look back at their yearbooks for years to come. Over that time, who you are right now will fade away – for you, for them, for everybody. All that will remain is that quote. So make sure it’s one that will last and that you’ll be able to appreciate even when you’re in middle age and wondering how the years went by

That’s not to say it can’t be a bit risqué, or meaningful, or about something you really, truly care about right now. It can be all those things. Just don’t make it cheap. The whole world is already filled with cheap. It’s online, in advertisements, in our shops, on our television.

And that’s fine. But it doesn’t have to go under your yearbook picture as well. There you can do something that ultimately reflects who you are and what you want the world to be. Because what you put under your picture isn’t just a few words – it’s a window into who you used to be.

Photo by Logan Isbell on Unsplash