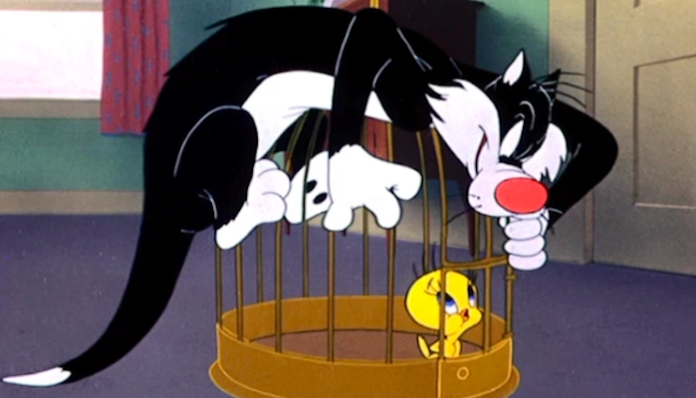 Despite their abundant cuteness, black cats have always had a bad reputation.  Western culture has perceived black cats as being an evil omen and having demonic powers that originated from witches.

Over the past 50 years or so, the media has given black cats have a negative connotation, which you can commonly see in Halloween movies and horror movies.

According to PETA , black cats have the lowest adoption rate; and they are two-thirds less likely to be adopted over felines of other colors.

Black cats are not a regular fixture on television shows or motion pictures, but, if you look carefully, their placement has purpose. Black cats featured in live-action media are always linked to fantasy or witchcraft, whereas cartoon black cats are commonly goofy, audience-friendly, and entertaining.

So, in honor of National Black Cat Appreciation Day, let’s reflect on 6 iconic black felines that have graced mainstream media over the years.

Figaro first made his appearance on the big screen in Walt Disney’s “Pinocchio.” He is the beloved pet of shop owner, Geppetto. This character was Walt Disney’s favorite throughout the entire film, so much so that he included the black cat as often as possible. The cat also had a cameo in “Alice In Wonderland” (1951). Figaro’s demeanor is loosely based off of that of a real cat; easily angered and slightly malicious, but with a heart of gold. Since his beginnings in animated films, Figaro has now become the official pet of Minnie Mouse.

Best known as one of the Looney Tunes, Sylvester J. Pussycat, Sr. is the only black cat in media with three Academy Awards.  We most often see Sylvester, who is often featured as a villain, in comedic shorts, as he attempts to catch the beloved Tweety Bird.. Sylvester has a recognizable lisp, often seems to make unintelligent decisions, and is sometimes a “scaredy cat.”

Otto Massamer’s Felix the Cat made his first appearance in 1919 in “Feline Follies.” Since then, he has gained enough audience attention to make the transition from television to feature animated film.

Julius’ creator intentionally designed him to look similar to Felix the Cat. This animated character was the first one Walt Disney named. He appears in various “Alice In Wonderland”-related short films such as “Alice Comedies,” “Alice in Wonderland,” and “Alice’s Spooky Adventure.”

If you’re a 90’s child, then you definitely remember watching “Sabrina the Teenage Witch” after school on ABC Family. At the time, Salem was the sassiest cat on television.  He was always the first one to put Sabrina in her place and wasn’t afraid to speak his mind. Ironically, Salem’s character plays into the notion that black cats are synonymous with witches.

If you love Halloween, then you probably love “Hocus Pocus.” Every year, we find it funny that Zachary had to light the candle because he was a virgin. Unlike Salem, Binx’s existence is the result of a cruel curse because he was unable to save his sister, Emily, from the Sanderson Sisters. The curse meant that he must live eternally as a cat.

Each of these cats above is a unique spin on a typical black cat. Though we may associate black cats with thoughts of fright or superstition, they are just as wonderful as any other friendly feline. So, if you want to adopt a black cat, please don’t do it because it’s trendy or spooky. Black cats are real animals who are looking for happy, forever homes. Be kind and gentle, and, most of all, enjoy National Black Cat Day!