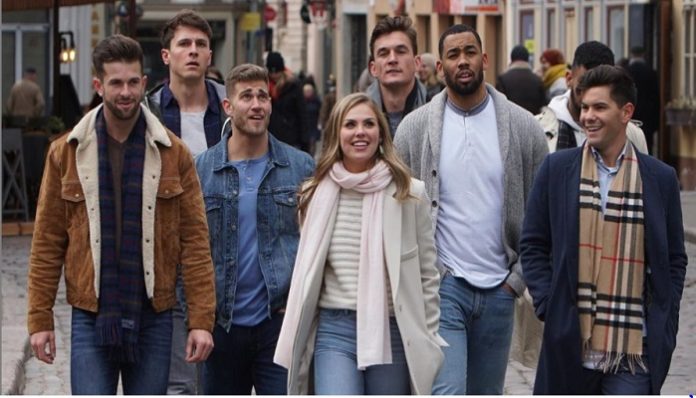 This week’s Bachelorette opens with the continuation of last week’s episode’s cocktail party, which was left hanging after Clay’s abrupt departure. All that is quickly forgotten however, as it appears the night’s antics pick up right where they left off; this includes David and Jordan’s ongoing feud.

Becca gives David a rose before he goes off to get some rest  even though he only has a black eye and some bruising around his nose. Jordan refers to as a “pity rose” for falling out of the bunk bed, and I actually think this might be a little bit true.

Then it’s time for the belated rose ceremony!

After the rose ceremony, Jean-Blanc appears upset that he got the last rose and it’s apparent that paranoia is beginning to set in. This is important to remember for later in the episode!

Now it’s off to Utah! In the snow-capped mountains, Becca seems genuinely happy with the location of the next dates. Garrett gets a one-on-one date. Now, as I said in my week 2 recap, my feelings on Garrett are incredibly mixed due to the hateful content he had been liking on his Instagram. However, he has since apologized, and though I’m not entirely sure if an apology is enough for me to forget it. I tried to put the debacle out of my mind and focus on what I saw on the screen of he and Becca’s date.

And I have to say, this date seemed like it went extremely well! Becca tells the camera that she is “very excited” about Garrett and even does the classic Bachelor jumping into his arms and wrapping her legs around him embrace. The two of them go bobsledding, thanks to the help of two former Olympians, and Becca makes the unfortunate comparison between the “twists and turns” of bobsledding and her journey of love. Yes, I’ve always found there to be something oddly romantic about bobsledding.

At dinner, Becca and Garrett really seem to connect, Becca going as far to tell Garrett he reminds her of her late father. This is, I’m sure, a great compliment, and not one to be taken lightly either. Garrett reveals some serious news that gave Becca some concern, but she gives Garrett the date rose anyway. The two then head off to be serenaded by a mid-tier country singer, Granger Smith, as is Bachelor tradition.

In the middle of all this, back at the lodge, Lincoln reveals he’s a flat-earther and wonders about how water could stay in the ocean if the Earth is round. I’m not going to say anything more about this statement. I just needed you to know it happened.

Next up is a massive group date, with 13 guys. The men have a lumberjack contest, which involves a lot of swinging of axes and tossing of logs. It’s offhandedly mentioned that Blake “lives in the mountains and eats bugs,” as if to say he will be good at this challenge. Basically there was a lot of drama between David and Jordan (as per normal), hot men in plaid doing manly things and a very excited Becca. The real star of this date is John, who surprises everyone by being great at tossing 400-pound logs and scaling trees. Leo says, with incredible intensity, “This is John’s moment.” Leo is right, and I’m glad to have witnessed it.

At the evening portion of the date is when disaster strikes. Jordan decides to take off his clothes again, this time to reveal the golden underwear Becca had gifted him with earlier. Becca laughs, but some of the other guys, i.e. Colton, take issue with it. Colton decides to be the right reasons police and tells Jordan he’s lost all respect for him. Colton appears to call Jordan a word that is bleeped and could possibly have been something derogatory. Jordan, surprisingly, makes a good point in saying that Colton shouldn’t speak about respect if he’s going to use words like that.

Jordan’s seemingly well manicured claws are coming out to fight!

The bigger drama of the night comes from Jean-Blanc, who has been slowly imploding the entire episode. His implosion comes to a head when he tells Becca he’s falling in love with her. The whole thing is painfully awkward as Becca hesistates before calling him intense and saying she’s not on the same page.

When walking him out, Jean-Blanc implies that he wants back the perfume he had gifted her earlier in the night and then claims that he never really meant that he was falling in love with her, and said only because he thought that was what Becca wanted to hear. This is obviously just a ploy to save face for feeling embarrassed, as I really do think Jean-Blanc thought he was falling in love, but it hurts Becca all the same. Needless to say the date ended and no rose was given.

The next morning, it’s time for Becca’s one-on-one date with Wills, only Becca is still feeling “off” from the events of the night prior. Wills is worried as well, but his cuteness saved the date! The two meet in a snowy field and snowmobile to a peak with a view where they sit by a fire and drink champagne. They share a few passionate kisses, and Becca claims that Wills has managed to turn her mood around. All in all it was a good date for her in that particular time.

I can definitely see a lot of mutual respect, as well as some attraction, between these two, I don’t necessarily see the chemistry between them that Becca has with some other guys. Still, there’s a good foundation here, and he got a rose, so he’s safe for a little while longer.

The men are lounging about in the lodge, planning how they will use their time with Becca at the cocktail party to secure roses, when Chris Harrison waltzes in to inform everyone there will be “no cocktail party.” So it’s right to the rose ceremony!

Goes: Christon and Nick, who both exit gracefully.

And of course, here are my weekly updates as each episode passes:

Jordan’s been spending to much time making metaphors and not enough time giving fashion advice! Us plebians need help, Jordan!

As for next week Becca announces that next week, the group will be heading to Vegas! Otherwise all we know is Jordan was upset for being last and he’s going to make a move. “I’m much like a sponge,” he says poignantly, “you can squeeze me and get everything out of me, but you’ll never know unless you try.”

And on that profound note, I’ll see you next week. And have yourself a little laugh with the drama going on between castmates of Bachelor Nation over Ashley and Jared’s engagement news!

Why You Don’t Always Have To Come Off As Happy