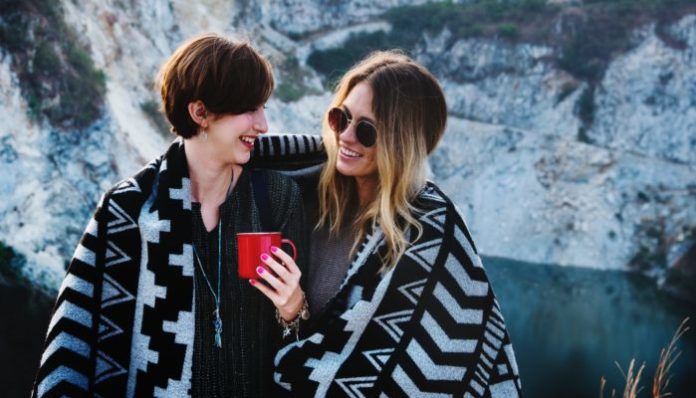 I love a guy with glasses or a woman with long hair. I’m a sucker for romantics, but also just large asses and beautiful eyelashes. I admire height but also intelligence and awkward humor. I prefer brunettes, curly hair or straight. Black, white, or purple, it’s all the same to me, but a kind and caring heart is a must first and foremost. Man or woman, a beautiful person is a beautiful person in my eyes. Yes, that’s right: I identify as bi.

I will admit, I have only been with men and I have been married to a great guy for nearly a decade. That doesn’t mean that women don’t turn me on, though, and it doesn’t mean that I’ve never tried to attract the attention of a female that I find fun (trust me, I’ve unsuccessfully tried more than one time in my life). I’ve had flirtatious fun and even developed crushes on women almost as many times as I have men.

Part of me feels like an outcast, and since I’ve become more open about my sexuality the heat has really been turned up. Some have questioned if I am being truthful or if perhaps I’m just “going through a phase.” I have found myself cut off from straight women the moment I point out a girl with a nice ass or a beautiful smile. I’ve also felt more than a little intimidated or ridiculed from the LGBT community though because I clearly lead a “straight life.” Part of this could be my perception, but they say perception is reality, don’t they?

I’ve come to realize that I’m not alone in these feelings of invalidation: there’s a whole lot online now dedicated to what many call bisexual erasure or bi invisibility. It is a pervasive problem, a constant struggle for many of us trying to find validation for ourselves. Whether intentional or not, many people question or deny the existence of bisexuality. Because I am happily married to a man, it is usually assumed that I am heterosexual; it is also assumed that when you see two men or two women together that they are both gay/lesbian. I’ll admit, even I have felt the pressure to conform or question whether my attraction towards people is real (I spent years silently lusting over one of my best friends…it was complicated).

So, what can we, regardless of our sexual orientation, do to help the bisexual community feel validated and accepted for who they are and who they choose to love?

“We can reduce bi erasure by rejecting inaccurate stereotypes about bisexuality. Bisexuality is just as valid as any other sexuality, and it is certainly not ‘just a phase!'” -Kelly

“Bi erasure is extremely prevalent, not only in everyday life, but in media as well. Particularly on fan sites such as Tumblr, canonically bi characters from books and TV shows are often portrayed as exclusively gay or lesbian. This is harmful because it marginalized bisexual people and seemingly prizes other sexualities while ignoring bisexuality. It’s important for fans of these characters to acknowledge that just because an individual is in a same-sex relationship doesn’t invalidate their bisexuality—they are still bisexual regardless of the nature of their romantic or sexual relationships.” -Hailey

“I know for me a lot of people didn’t believe me because I am married to a man. Just because you are married to someone of one gender doesn’t take away from the fact that you are attracted to more than one gender. Also, it’s not just an attention thing or a phase: it’s just how you are.” -Maria

“I’ve gotten the very offensive assumption that bisexual people are overly promiscuous, essentially just sex fiends who are looking to ‘get it wherever and from whoever they can,’ an ‘any sex will do’ mentality. It’s very hurtful. I have gotten the assumption that I have a gender that I ‘prefer’ and that in the meantime I’m ‘just having fun and experimenting’ as opposed to actually looking for a meaningful relationship with someone of either gender, which is what bisexuality really is.” -Kate

After talking to several people among several circles to which I belong, I found a common denominator to what is causing bi erasure: invalid assumptions. We have to stop trying to fill in the blanks for people; we have to stop making accusations or assumptions just because of our lack in knowledge or our previous experiences both in real life or thanks for mainstream media. We all need to take a cue from Lily Moscovitz from “Princess Diaries” and just simply shut up and listen.

We need to allow people the freedom to express themselves and be who they are without trying to stuff them in the boxes of conformity that our society feels makes everything “better” or “right.” Get to know people before you try to label them or cast stones, and I mean really get to know them. If you are bisexual, you can help reduce bi erasure through sharing your story with people you come into contact with, by tactfully correcting their false assumptions. If you are not bisexual, you can help reduce bi erasure by talking to someone who identifies as bisexual: listen, ask questions, get accurate information instead of just assuming you know everything.

Black, white, purple, green, gay, straight, trans or bi: Every person on this Earth is beautiful, is connected, and has something wonderful to offer us along our journey.

What Girls Really Mean When They Say These 8 Things