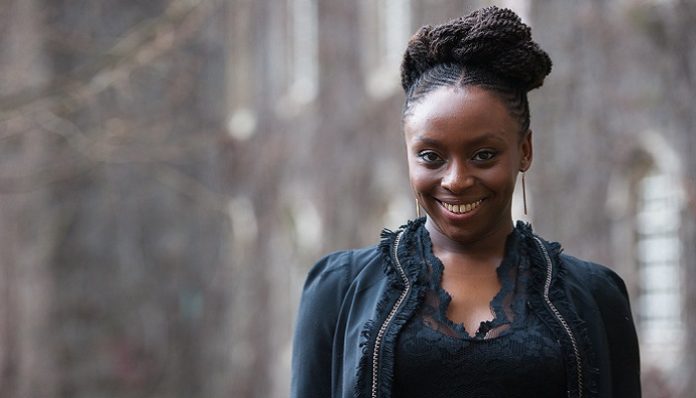 In the new era of fourth wave intersectional feminism, we’ve seen the rise of a new generation of feminist culture creators, authors, poets and speakers. Informed by the works of the feminists who fought on the front lines before them, their work is diverse and inclusive in ways we haven’t seen before. These outstanding authors cover important issues from intersectionality to body image; all of whom deserve space on your bookshelf.

You’ve probably heard Chimamanda Ngozi Adichie’s voice before; she’s the TED speaker Beyoncé sampled in her song Flawless. Adichie is a progressive intersectional feminist, writing and speaking about the effects of both gender and race. She has penned several novels including Half a Yellow Sun, set in Nigeria after the civil war, and Americanah, the story of a young Nigerian women who travels to the US for university. She has also published an excellent written version of her Beyoncé-sampled TED talk, We Should All Be Feminists.

This is me on the set of #aliasgrace when we were filming it.

Toronto author Margaret Atwood has written some of most haunting versions of dystopian fiction, especially for women. Her most prominent novel is The Handmaid’s Tale, which has been adapted to an award-winning Hulu series. Atwood has several other fantastic feminist novels. The Edible Woman, The Robber Bride, and Cat’s Eye are all other works by Atwood that explore the complexities of what it is to be a woman in modern society.

Roxane Gay, another prolific, modern, intersectional feminist, is witty and introspective in her published works. Gay has written a wide variety of works, from her best-selling essay collection Bad Feminist, short stories in Difficult Woman, and a memoir, Hunger. She tackles issues of gender and race, as well as touching on the issues facing plus sized women. Gay’s writing makes such topics funny and approcable, humanizing some very difficult subject matter.

Poet Rupi Kaur is perhaps the most talented of the Instagram poets. Her short, delectable poems are touching and raw, without becoming inaccessible. Her two collections, Milk and Honey, and The Sun and Her Flowers, are deeply personal, and surprisingly universal in their themes. As a child of immigrants, Kaur meditates on what it means to be a Indian-Canadian, explores her relationship with other women and her own expression of femininity. Kaur’s celebration of identity and self-love is essential to any modern feminist.

"Life is very short and what we have to do must be done in the now." -Audre #audrelorde #empoweringwomen #empowerment #feminism #feminist #womenempowerment #quotes

Poet and author Audre Lorde is required reading for anyone looking to understand the origins of intersectional feminism. Lorde, along with Angela Davis, introduced the ideas of intersectionality into second wave feminism. Lorde’s works meditate on her own identity as a black, lesbian woman and her place in the world, as well as her experience with cancer. Her work spans essays, such as the collection Sister Outsider, poetry in Black Unicorn, and bio mythologies in Zami: A New Spelling of My Name.

Chinese-American author Maxine Hong Kingston has written three novels, all centering on the experience of families who immigrated to the United States. Her novel The Woman Warrior is a complex mix of autobiography and Chinese folklore, depicting the complexities of trying to blend two cultures. Hong Kingston has written two other novels, Tripmaster Monkey and China Men, which both focus on similar themes of blending cultures.

With so many strong, smart, and talented women writing, we’re living in a great age of literature. Female authors have long been influencing literary tradition, but only recently have they been given the credit and recognition that is due to them. With the fantastic work coming out of modern women on the front lines, we should all be paying attention.