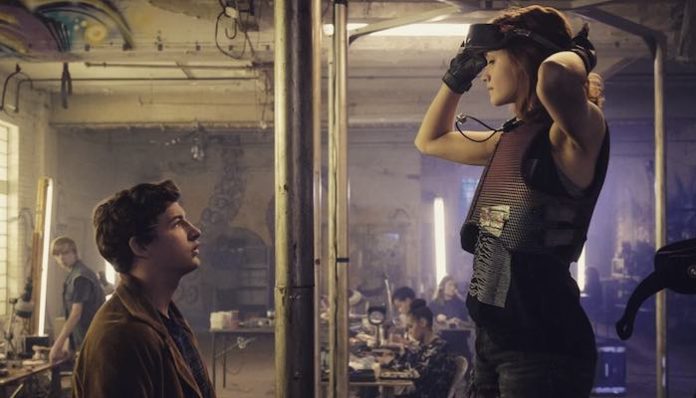 Based on the 2011 debut novel by Ernest Cline, Ready Player One isn’t just another nerdy, sci-fi film. Sure, the basis of the story line is set in the year 2045 where drones are everywhere and most people spend their time in the virtual reality world of “The Oasis,” but there’s a lot built into the plot that involves so much more than just “gamer speak.”

The main character, Wade Watts (or Parzival as he’s known in “The Oasis”), seems to embody the stereotypical nerdy underdog hero one would expect to be the center of this type of film. Also in true fashion for any film geared towards the true millennial, the obvious villain in the film is corporate CEO Nolan Sorrento. Of course there’s also love interests, unexpected friendships, and turns of allegiance in some cases.

There’s really a lot that makes this film accessible to all. There’s some pop culture references focused in the 1980’s, there’s a lot of awesome CG and tech focus, there’s love and laughs, there’s suspense, there are (thankfully) no political focus, and there’s even some pretty awesome racing (as long as you aren’t easily motion sick like me). I went into the film with uncertainty as to what I was seeing, tagging along with my husband who has read the book numerous times, but I quickly found myself hooked and really enjoying the film.

The negatives about this film are really hard to find. I will say, if you read the book before seeing the film you may be disappointed in what is left out or altered to make everything fit into the limited time of a film (as all movies based on books leave us slightly let down). I was also bummed that there weren’t any montage scenes as this would have been an amazing homage to our favorite films from the 1980’s and a good way to throw in some of those amazing tunes from the time as well. My husband also mentioned that he was a little disappointed in the “lack of darkness” in the world as he imagined a world based 30 years into the future to have more damage, less motor vehicles, and more despair.

Overall, and without spoiling the fun of seeing it for yourself, I highly recommend Ready Player One to anyone in their 20s or 30s to see. You don’t have to be a gamer or a tech geek to get into the story, I promise. Also, there is a typical wrap up that leaves it with a “happy ending,” so you won’t leave the theatre scratching your heads questioning if there will be a sequel. It will be a few hours well spent, no coinage required.