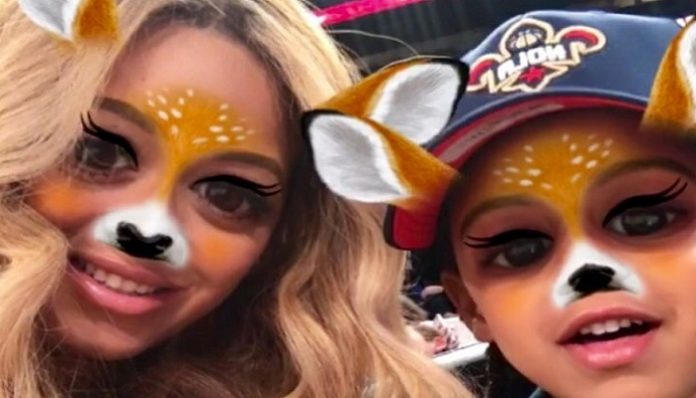 Blue Ivy Carter, daughter of Beyonce and JAY-Z, is just six-years-old and she is already living a better life than you.

Yes, it’s sad but it’s true. From auctioning off the same amount of money you spent on one year of college tuition to slaying the fashion game with her mom, Blue Ivy is living her best life and it will make you jealous AF.

1. She Bids Your Yearly Salary Like It’s Pocket Change

Blue Ivy bid $19,000 at the 2nd Annual Wearable Art Gala in Los Angeles on Saturday. She held her paddle high and bid $17,000 *chokes* on a cyclic painting of Sidney Poitier during the event’s live auction, emceed by Star Jones, according to Vanity Fair.

Despite JAY-Z’s best efforts to jokingly take the paddle away from his daughter, Blue bid again for the piece. This time raising the bid to $19,000. However, Tyler Perry beat out the bid and won the art piece for $20,000. Blue later won another art piece by Samuel Levi Jones for $10,000.

Hey Blue, next time you decide to donate money to a charitable cause, feel free to Venmo me.

Beyonce slays always so it’s not surprise that her daughter slays along side her in a matching outfit at the Wearable Art Gala.

When Blue is not spending money at art auctions, she is usually spending the money on her wardrobe. Yes, Blue has been spotted out with a heart-shaped Valentino Rockstud Minaduiere purse ($3,700), a pink Gucci suit ($1,100) and a Plexiglas cat clutch ($2,490).

My six-year-old self with her Hello Kitty purse, Winnie the Pooh t-shirt, and $10 mini-skirt is literally sitting in awe.

3. Blue hushed the Queen and her man

I can’t think of one basic, Starbucks-loving, UGG-wearing-girl who would ever think to hush Queen B or her cheating (maybe?) beau. But Blue Ivy did. This six-year-old ball of sass had the nerve to stop her mom and dad from clapping at the Camila Cabello’s Speech at the 2018 Grammy Awards.

Name one one other six-year-old how has this much power… I’ll wait.

4. She already has her own fan base

JAY-Z and Beyonce who? This iconic duo has literally created a super-star and the internet loves her.

#BlueIvy is always the coolest person in the room regardless of who else is there, including her parents.

Let’s not forget that she is just downright adorable.

(Except for the fact that she looks like JAY-Z. Does anyone else see that or is it just me?)

I guess when you’re the daughter of Beyonce, the most beloved, praised and hailed woman in the land of basic, it’s hard not to gain a few fans of your own.

If this is what Blue is like right now, can you image what she is going to be like in 10 years?

Oh Lord, help us all.

What do you think of Blue Ivy and her lavish wardrobe, spending habits and devoted fans? Comment below!

How Changing The Divorce Rate Starts With Us