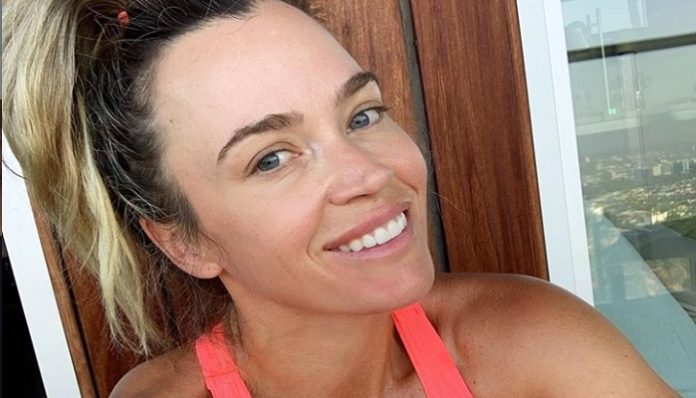 It’s safe to say that we’ve all made decisions that we’re not proud of. We often times end up regretting our decisions and having in-depth discussions with our friends after the fact about how we shouldn’t have done something. It’s a vicious cycle that doesn’t seem to end.

That’s why we need more people like Teddi Mellencamp Arroyave, aka the best part of The Real Housewives of Beverly Hills. Teddi, who is in her first season as a housewife, is an accountability coach and she is literally paid to hold people accountable. Whether it’s their fitness goals, relationships, or general life decisions, she’s the go-to person if you need someone to keep your life on track.

The most fascinating part about her is that she’s authentic through and through. It’s not only a “job.” For her, she applies what she does professionally into her personal life. Being that she’s engaging with rich, snobby and sometimes downright deplorable human beings on Housewives, she brings a breath of fresh air to the series. These women are known for being fraudulent, inauthentic, disingenuous, and everything in between. Teddi has made a mark for herself by standing above the nonsense and calling it like how she sees it.

While many may find her “boring,” or that she doesn’t add much to the drama of the show (which is why people tune in), for me, it shows that not everyone lives up to the stereotypes they’re expected to play into.

Holding yourself accountable is often hard to do, and when you have an accountability buddy, or another person who has your best interest in mind who can also be a rational and logical thought making individual, your life might see true progress. Accountability is about understanding when you’re right and when you’re wrong, learning how to handle negativity and criticism and work through it to better yourself. Accountability, in my opinion, means that instead of placing blame elsewhere, you accept the truth, the fault and you move forward and learn from the mistakes made.

In Teddi’s case, even though she doesn’t always have the most popular opinion or the real truth the ladies want to hear, she knows that she has to lead by example. For example, when Teddi called Dorit for being extremely late and proceeded to make Dorit understand that it wasn’t about how late she was, but in fact that Dorit couldn’t admit that she was in the wrong. It’s instances like these that can be applied in our lives. We all have friends who are habitual late arrivers, but we can only hold them accountable in a respectful way, not shame them, or place blame elsewhere.

To me, I look at people who can’t hold themselves accountable as people who can’t be trusted. If you can’t accept responsibility for something, that proves to me you’re not willing to grow or learn from past mistakes. It also means that more than likely you’re susceptible to repeating the bad behavior.

Over the years, I’ve found that I am the voice of reason with my friends. I’ve listened to all my friends complain, bitch, vent, express their feelings and frustrations over things that were so dumb or decisions that I didn’t agree with. Were my friends mad that I didn’t agree with their decision? Of course, but I would also be a terrible friend if I didn’t tell them to be cautious or not go through with their decision. You want your friends to understand that their actions have consequences and they may be long term, not short term.

This is another form of holding someone accountable. You have to present your friend, client, family member, etc. with the opposite argument for them to have all sides of the decision-making process. I’ve been an advisor to undergraduate students before and let me tell you, they wouldn’t know accountability if it hit them dead in the face.

Ultimately, you can lead a horse to water, but you can’t make it drink.

If you stay true to yourself and your beliefs, you’ll be much better off and a great resource for those closest to you. Holding someone accountable is not the easiest and not the most popular position to take, but it will also help you live a better life.

Why You Need To Start Unfriending People In Real Life