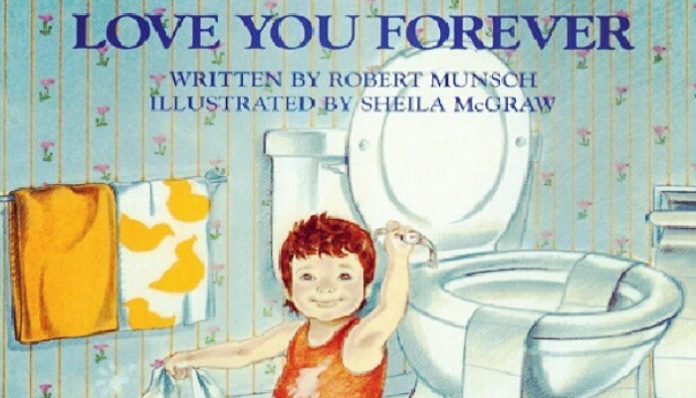 It should come as no surprise that Munsch, a man who wrote books for kids, really wanted to be a dad. Tragically, his wife delivered two stillborn babies, which overwhelmed Munsch with sadness and grief. To cope, he wrote a little private poem he’d say out loud, quietly, to himself, but he never let anyone else hear it, not even his wife. Such is the often private, deeply personal struggle of grief. Munsch told The Huffington Post it was his “way of crying.”

A major part of that poem:

I’ll love you forever,
I’ll like you for always,
As long as I’m living
my baby you’ll be.

That poem, forever in his mind, eventually inspired a story, one about a mother watching her son grow from adorable baby to messy toddler to grown man…while she grows old and sick. Munsch’s poem recurs throughout the book, as Mom reminds son she’ll “love you forever.”

[Let’s all pause a second for an ugly cry.]

Munsch took his deeply personal, unimaginable loss and turned it into a universal expression of love that millions of parents could share with their kids. And there are three kids who have definitely gotten to experience the profound emotional impact of Love You Forever. Munch and his wife eventually adopted three children and, this book lived on forever, much like the memory of his other children.