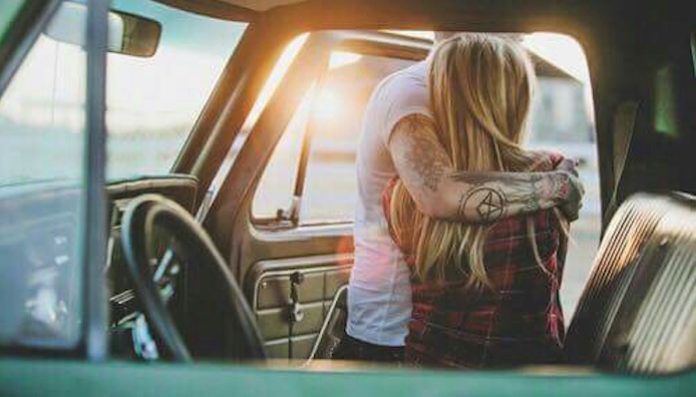 You shake your head laughing at the thought of meeting up with him, yet you find yourself getting ready, grabbing your things and walking out the door. As you get in your car to go to the meeting spot you’ve grown to know while with him, the nerves hit you. Not because you’re nervous about seeing him, it’s more of a strange feeling of knowing what you’re doing isn’t right. But you don’t care.

The car is now parked and you wait patiently for him to park next to you. The parking lot only has two cars in it yet that’s too many for comfort. You hop out and get in the truck you almost treat as your own at this point because you’ve become so well acquainted. The familiar smell makes you feel at home and brings back fond memories of the past. But they’re memories for a reason.

The painful, awkward small talk starts and makes you want to claw your brains out. This isn’t how we used to communicate. We never used to be like this, filling each other in on our lives, giving updates on life events and thinking of something to ask to keep it flowing. We knew what we were up to because we would do it together.

As the drive to the next spot comes to an end, so does the talk. He undoes the seatbelt and leans in for a kiss while caressing your thigh. It feels so good but so wrong. He should be doing this to the girl he’s actually dating, not a girl he broke the heart of before his current flame that seems to now be dead.

The sex is okay as always, only so much you can do in a vehicle. It’s intimate and semi-sensual, while filled with an ‘I miss you’ type of passion. Reuniting only for the sole purpose of sex isn’t necessarily right, but just being in his presence again is a greater feeling. But then it’s over and the guilt hits you. He’s using you to cheat on his girlfriend, you’re well aware she exists, and your still more than willing to do it anyway. You are a horrible person, and he’s just as bad.

You ask him about his relationship and why he chooses to hook up with you instead and his answer never changes; she doesn’t give him freedom, is demanding, he’s not attracted to her anymore, and she’s too clingy. Well, do you blame her for your cheating past? Meanwhile, you’re a breath of fresh air, fun, and he feels comfortable with you to talk to about this stuff. He’s too scared to end it with her, yet he had no problem doing it to you. You’re his easy way out of his relationship yet he won’t ever have the heart to tell her. It’s a vicious conversation that happens every time.

Do you feel bad about being the other woman? Absolutely. You know what it’s like to look up to him with the most love possible only to have him look away from you. She deserves to know and to have a conversation. Yet something is holding you back from telling her. Is it because you like that you finally know where you stand with him, or the fact you like that you know you’re still wanted by him?

Regardless of the fact, it’s an equally crappy feeling to know that at the end of the night when he says goodbye that he can go home to a clingy girlfriend who loves him, and you go back to your place feeling just as alone and unloved as before.