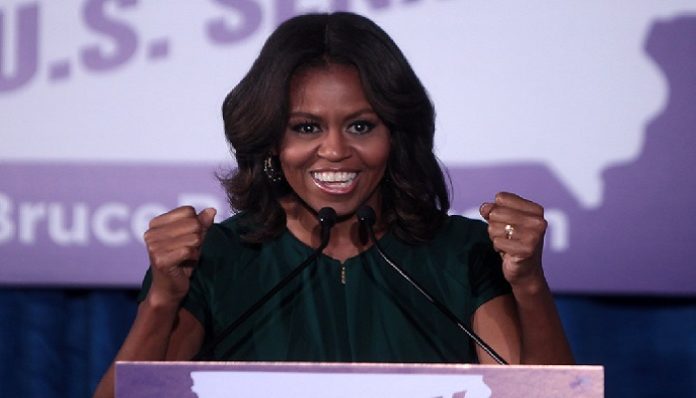 Do you think Michelle Obama is Beyoncé’s Beyoncé?

If you haven’t seen Michelle Obama’s DNC speech, you need to. Not only was it a celebration of black womanhood, a la Beyoncé, but the First Lady also solidified her status as a hugely influential individual, completely separate from her husband. Her speech supported the now-nominee Hillary Clinton, but she also touched on racial injustice, feminism, and even managed to slide in some shade toward Donald Trump. Her speech was so powerful that Twitter soon erupted with calls for Michelle Obama to run for presidential office.

I have to say #Michelle Obama’s speech was pretty good. If u missed it, no worries, Melania #Trump will repeat it at some point.

Michelle Obama has had a huge effect on the US during her eight years as FLOTUS. She hasn’t sat idly by while her husband ran the country. She’s been active as both a political figure, and as a #girlboss celebrity. She’s appeared on more late night talk shows then you can count, even Jimmy Fallon’s “Ew.”

More importantly, Michelle Obama has taken on major social issues in the US and abroad. She’s campaigned against childhood obesity, worked to bring equal education opportunities to women and girls internationally, supported military families, and spoken out against the history of racial segregation in America. Her accomplishments, including a Harvard Law degree, are impressive for anyone, but she’s tackled them all with exceptionally good humor and grace.

With the end of President Obama’s time in the White House approaching, America also has to be prepared to say goodbye to the much-loved First Lady. Her speech last week covers so much of what she’s been able to do for the US in those eight years. She’s been able to unite us. While her husband, Hillary Clinton, and Donald Trump  have all been divisive in their own ways, Michelle Obama has transcended that. She’s one of most popular first ladies of late, due in part to her intelligence and charisma as a public figure. Her approval ratings were completely independent from her husband’s,; a separation between POTUS and FLOTUS that was basically unheard of prior to the Obama’s.

Incredible speech by an incredible woman. Couldn’t be more proud & our country has been blessed to have her as FLOTUS. I love you, Michelle.

Michelle Obama is the face of a new kind of womanhood. Not only is she female, she’s also black. She’s a highly educated, highly intelligent black woman who is not afraid to speak out about the injustice she sees. She’s not dependent on her husband in any way. Michelle is incredibly strong. She’s weathered undue criticism, made it through many years of post-secondary education, has supported her family throughout their stay in the White House, raised two amazing daughters, and been the champion of so many important causes.

There cannot be enough praise sung about this women. We really and truly do not deserve her. She is a symbol of a new kind of womanhood. She is supportive of her husband and family, but also independent. She has thrown herself into her role as FLOTUS, and made huge strides for women in politics, American and around the world. She blends grace and beauty with a quick wit and fierceness. She is real in a way so many of our politicians and public figures are not. We are lucky to have had Michelle Obama grace our country. We truly do not deserve to have a women so fantastic as our first lady.

Should I Get Back With My Ex After They Cheated? 5...