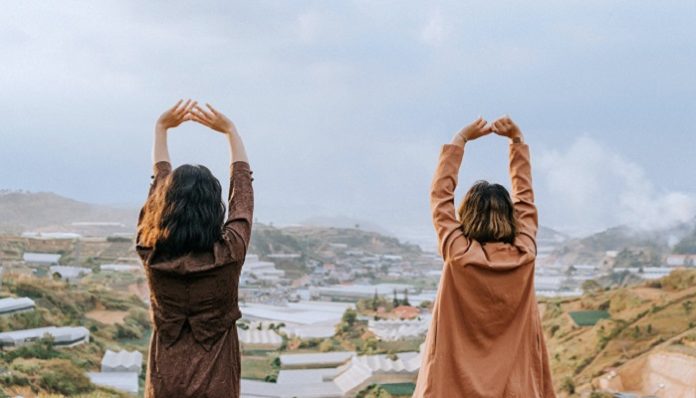 We’ve all heard it a million times; it’s a conversation topic that never gets old: “What are you going to be when you grow up?” At four or five, you would say “Princess!” or “Firefighter!” and there was always a good-natured response, a little laugh or a pat on the head.

Now that we’re old enough to be “Princess”- or “Firefighter”-viable, I’ve realized that the questions don’t change but the responses do. Somewhere along the line that spans the space between our years of then-and-now, we’re supposed to have changed. And by “changed” I mean “become more rational.” And by “rational,” everyone means “decided on a job prospect that produces heaps of money.” Somewhere along the line, we’re supposed to have put happiness on a second-rate pedestal.

So here we are, less than happy and searching for it. What exactly it is, is unclear. But we’re looking because really, how else are we expected to carry on?

What I propose is this: we’re happy but we’ve got some kind of Cognitive Dissonance going on. (Yes, I took Freshman Introductory Psych.)

Maybe we aren’t living the lives we planned to live. Or maybe we are, and that’s precisely the problem. Whatever the situation may be, it’s not what you expected. Of course it’s not, or else you wouldn’t be feeling this way. Maybe you went all Cody circa Suite Life on Deck and made some six-month plan, but when the time came you flopped harder than a salmon out of water.

Or maybe you’re not taking the plunge and decided not to dump yourself into the deep-end, like that crazy moment when you volunteered for the dunk tank. You know that this plunge has much bigger strings attached and there’s more at stake than getting wet. In fact, in dunk-tank-risk terms, the water feels so deep that your feet can’t even touch the ground. So why even try, right?

The better question to ask is, “Why not try?” The answer to this question is always hard, always non-rhetorical. It sets gears spinning in your head and causes your heart to clench. All of this happens because it’s unthinkable. Ironically enough, it’s unthinkable to go after what you want, something you’ve always wanted.

I’m telling you now: The world is going to be against you. So you want to be an actress? International peace envoy? World-renowned sous chef? They’re going to say it’s crazy.

What they mean is, it’s scary. It’s scary to go after something so uncertain and confusing but so uniquely intriguing. It’s scary to chase a dream sprouted beyond the spines of traditional textbooks. And it’s scary to think that virtually everything you’ve learned in a classroom is for naught.

There’s a quote that rings true to me, and has ever since I first heard it. It goes something like this,

“Who were you before the world told you who you should be?”

I’m captivated by it because sometimes, I really don’t know the answer. It’s puzzling – and a bit jilting – to realize this.

You think, I thought I’d know who I was by now. Everyone said I would. I’m supposed to know.

The thing is, I don’t know if there’s a “supposed-to” at this point anymore. We’ve all branched off into a dozen different directions and wherever you’re at, I can tell you that it’s alright. As long as you’re not living in your parent’s basement on a ratty old futon, subsisting off of take-out pizza and Pepsi, you’re alright. In fact, you’re better than alright. You’re good.

Maybe the life that your heart aches for is confusing because you’ve got a slew of other interests, all competing for the same space. I get that, too. I’ve always been more than a little indecisive, and it’s so hard for me to make up my mind. Seriously: It takes me ages just to figure out what entrée I want to order. But if you’re torn, it doesn’t mean you have to choose a single interest and forget the others. This is not a one-and-done deal.

Figure out what else you like and pursue those passions, too. They don’t have to be as equally large in caliber as one other, but if you want them to be, that’s cool too. Go to culinary school, but take a business class on the side. Study politics and foreign policy, but take on a role at the local theatre to preoccupy your down-time. You can have it all.

You owe it to yourself to pursue, at the very least, a bit of that unspoken aspiration. The way I see it, you’ve got your whole life stretched out in front of you.

You should live it as yourself.

10 Beyond Crazy Breakup Stories That Will Shock You

Why Is Tragedy The Only Thing That Brings Us Together?