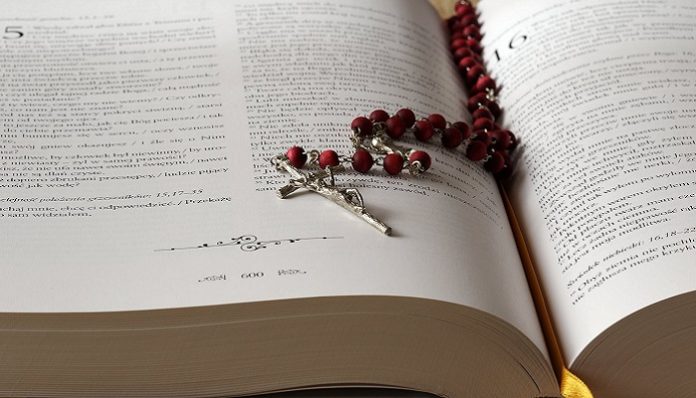 DISCLAIMER: These opinions belong to the author, and the author alone. The author is not attempting nor wishes to generalize all religious people.

I write this sitting in between the shelves of books at the library on campus. When I look up, I can see the works of Carl Sagan. Just a few shelves down is Richard Dawkins and (just a wee bit further) the OG himself: Charles Darwin. Some shelves down to my right lays a shelf containing the Bible, the Quran, and the Torah. Somewhere in between these texts, is myself. I’m in academic purgatory, if you will. It was in this same library that I renounced my faith. I did so for the following reasons:

1. The justification of bigotry: misogyny, homophobia, racism, and transmisogyny

It seems to me that behind any sexist, racist, homophobic, and transmisogynist legislation passed, religion seems to rear its ugly head. Religion, specifically passages in religious texts, have been used to justify violence towards people of different backgrounds.

After combing through the Bible and the Torah several times, I cannot count the number of stories and passages that advocate for blatant bigotry. Personally, I can’t find myself being able to take solace from the same text that hate groups use to encourage their violence and beliefs. History is littered with leaders, armies, and individuals who felt that God was on their side while committing their atrocities. I cannot comfortably stand side by side with this.

Hypocrisy was truly the straw that broke the camel’s back for me and religion. While attending a service at a friend’s church on fine Sunday morning, I heard the preacher belting out a moving sermon on the importance of maintaining the “family unit’. He degraded same-sex couples, trans parents/children, and single-parent households. I happened to be sitting next to his mistress and their illegitimate (but adorable) children.

From what I’ve read of religious texts, they all have one thing in common: you must follow the laws of the religion in order to find yourself in God’s Grace or eternal happiness. I cannot understand the cognitive dissonance that folks have where they can go against their religion’s rules (and girl, there are many) yet still  condemn others for their sins.

3. Hindrance of Progression: no stem cells for you!

It seems as though religious extremists do whatever they can to drag humanity back to the dark ages. Whether it’s interfering with the educational system, punishing girls for going to school, or rewriting textbooks, religion in my eyes is a hindrance to humanity’s progression. As technology pushes the zeitgeist forward, religion seems determined to pull it backwards. It seems hellbent to keep things horribly oppressive and demeaning.

All my life, I’ve seen many religious people incapable of acknowledging others’ humanity because their ancient text forbids them on the grounds that their existence goes against their rules. In my eyes, religion encourages stagnation due to either fear of the unknown, blasphemy, or punishment.

Now, I understand that I can only speak for myself and my own experiences. I was raised by a loving Pentecostal family who never once threatened me with fire and brimstone for wrongdoing. In fact, some of my happiest moments stem from religious holidays. I have no hard feelings towards those who have faith. I’m also not one of those fedora wearing neckbeard atheists who troll people online or mock their beliefs. I’m just a non believer sitting in the library with a paper due at midnight.

To My Fellow Sexual Assault Survivors, It’s Time We Share Our...