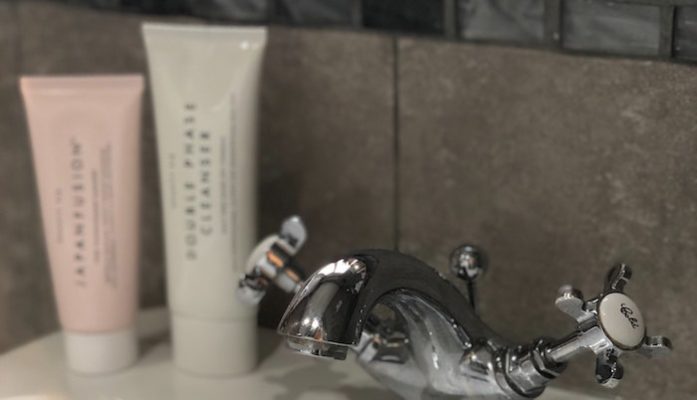 Breakouts are like breakups. They make you cry and give you poor self-esteem. The more chocolate you eat the worse they become. At twenty-two I’ve become obsessed with this quest I like to call “The Quest To Clear Skin”. If it says it will give me clear skin I will probably buy it and try it, which usually leads to disappointment. I’ve been to many dermatologists, spas, and skin clinics. I’ve tried organic-this and all natural-that. However, the more I tried the worse my skin became and I got sucked into this mindset of thinking that nothing I tried or did would ever make the horrible scarring and red spots on my face go away.

At nineteen I was depressed. I was a freshman away at university trying desperately to find a little group of friends to belong in. I had never suffered from acne in high school and was ashamed of my skin. I wouldn’t leave my dorm to socialize and would even miss class sometimes because I thought my skin looked that bad. I would cry constantly over my appearance and became worried that people wouldn’t want to be my friend because of it. I got into this habit of covering my chin (where my acne was) with my hand while speaking to anyone because I was so convinced that all anybody was looking at was my acne.

This fear and depression consumed me for a year.

I finished my first year of university with extremely low grades and an even lower self-esteem. I spent the summer before my second year hiding in my house, rarely leaving to see my friends from home because I was worried that going to the bar would result in people making fun of me for my acne scars. This paranoia and insecurity really took a toll on my mental health. I became anxious about everyday activities such as running to the drugstore or going out for dinner. I never left the house without makeup on because I didn’t want to run into anybody with my ugly red scars visible. And then something happened.

I spent a lot of time on YouTube watching makeup tutorials and reviews on skincare products. I became obsessed with the beauty world and the more I watched the more I learned about what it means to be confident in your skin. There were girls on there that had acne worse than mine who had thousands of views on their videos. They chose to flaunt their skin rather than hide it.

I had spent months agonizing over my skin and thinking that nobody I knew was dealing with the same problem that I was. What I should have done instead of hiding was stepping out of the shadows and focusing more on having fun than on whether people were looking at my skin. These girls on the Internet helped me grow some of my confidence back and with their advice I slowly was able to get rid of the worst of my acne with some help from a new dermatologist.

I still have a lot of scarring on my chin from the days when my acne was at its worse. I still break out and I still have days where I feel very insecure about my skin. However, all the worries I had about people making fun of me or not wanting to be my friend were worries that I never needed to have. I overcame my acne and I stopped letting it define me.

At twenty-two I’m still on “the Quest To Clear Skin” but I can now run to the grocery store makeup free and without any hesitations. I’m comfortable in my skin because it’s mine. And you should be too.