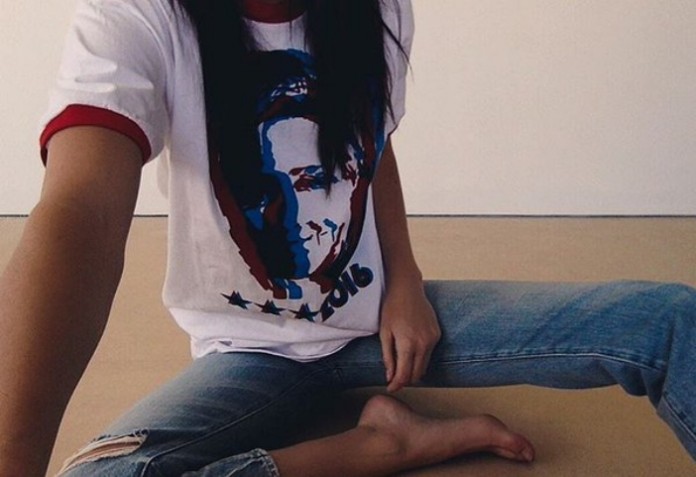 The 2016 election is right around the corner and, like most elections, I’m already tired of the campaigning and hearing news about the candidates. Yet, I still reach for the paper every day to see if any of the candidates have said or done anything of importance (of even just anything lol worthy). And now, with the election only eight and a half months away, we have celebrities endorsing their chosen candidates on social media.

Today, Kendall Jenner tweeted out this cute little T-shirt photo, with an obvious stance of supporting Hillary Clinton. This is the same girl who just tweeted out a picture of her butt in support for a designer…what a role model.

Here’s the problem, though: we look up to celebrities. We try products because they endorse them on social media. We do things because they do them – sometimes blindly, without think about the consequences.

So when the Kardashians’ and Jenners‘ publicly come out supporting Hillary Clinton, it becomes problematic because some of their fans, who have just turned 18 or haven’t been paying attention to the election, will blindly follow them and vote for Hillary too. With the Kardashians’ and Jenners’ being the celebrity buzz of our generation they, they will probably give Hillary a whole new audience of their fans.

Granted, Hillary has struggled in the past with the younger age group, but it shouldn’t fall to the Kardashians’ shoulders to get her to that voting demographic. Why? Well, instead of working to get the support of the younger generation, Hillary has simply accumulated the support from people only like her because Kim and Kendall like her.

Don’t even get me started on Trump’s celebrity endorsements because, one: they’re weird as f*ck, and two: we really just need to shut up about him, and three: he is a celebrity himself, so he shouldn’t really be running anyway.

Ronda Rousey, who just hosted Saturday Night Live, has come out supporting Sanders, gaining him random UFC fans and people who follow Rousey in general. Phil Robertson (think “Duck Dynasty”) has endorsed Ted Cruz, gaining him the votes from all the southern/midwest voters who watch that show, but probably don’t really know anything about what Cruz is about. In short, random voters in the US are going to end up voting for weird candidates just because their favorite celebrities have sat down and endorsed them.

I think that no celebrity should “endorse” a specific presidential candidate.

Candidates have to earn our votes, not simply get them because we like the celebrities who might vote for them. Celebrities shouldn’t be abusing their power on such crucially important matters. The campaign for presidency for some of the candidates has become a popularity contest – a race for ‘who can get the most celebrities to support me so that I’ll win,’ while other candidates flounder in their polls because they’re actually campaigning. Instead of listening to our fav celeb crush or going with who has better hair, we should listen to what is coming out of the candidate’s mouth, and make an informed decision for whom to vote.