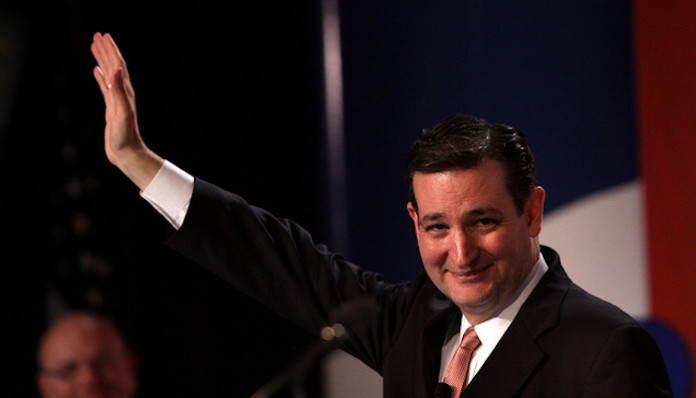 Senator Ted Cruz triumphed over Donald Trump last night during the Iowa Caucus. While many Americans may sigh with relief, knowing that Trump’s Presidential win is one step farther away from becoming real, you should still be a little afraid.

Cruz is no walk in the park. Though he lacks Trump’s total gracelessness and bravado, he’s still an arrogant, Ivy League kid with his head up his ass. A very dangerous combination.

On policy, the two have a lot in common, except Cruz is smarter and level-headed enough to actually get things done. He’s like Trump with a filter…a really scary and manipulative one.

As the Presidential race officially kicks off this week, we bring you the 6 reasons why Ted Cruz is a mad man.

2. He mustn’t hear himself when he talks.

Ted Cruz is the king of nonsense sound bites. Heck, when you google the man, the first suggestion is, “Ted Cruz – I was bitten by an octopus“! My personal favorite is,

“Twenty years from now, if there is some obscure trivial pursuit question, I am confident I will be the answer.”

3. Or, actually…he does hear himself.

Apparently, Cruz’s nonsense is intentional. Rolling Stone argues that Cruz is so smart that he plans these “gaffs” to work the media and the conservative public. How does it feel to be manipulated? Cruz is smarter than all of us, and he knows it.

When it comes to policy, Cruz shows that the U.S. shouldn’t support anyone that’s not just a wealthy, Ivy League man. See his policy on: women’s issues, a super high sales tax, gay marriage, the gold standard – you name it.

5. He even wants to cut out people like him.

Cruz’s immigration policy makes me face palm. His father legally entered the U.S. in 1957 as a political refugee from Cuba during the Revolution. Yet, he wants to exclude Syrian migrants from taking the same path – unless they’re Christian. Because Christians can’t also be terrorists.

At the end of the day, the Iowa results don’t mean much. NPR’s research revealed this week that the caucus rarely chooses the person that’ll eventually become President. However, the results can do a lot to sway to stays in a race, who rises to the top and who bows out early. Heck, it’s not even midnight yet, and Martin O’Malley has already suspended his campaign (after only receiving 0.6 percent of the vote in Iowa).

While I always enjoy a good blow to Trump’s ego, I’m not too hot on Ted Cruz either. There’s a lot of scary people out there who could become our President, and lucky for us, there’s still nine months of this shit left.