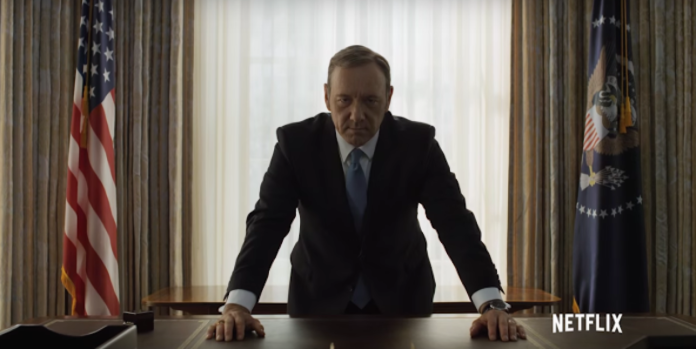 Netflix and Chill just got about 9 times more likely today. At the 2016 Television Critics Association (TCA) Winter Press Tour Netflix announced the premiere dates for 9 of their original shows. With one show being released every month from March to August, your Netflix-and-Chill-ability just skyrocketed.

Starting on March 4, 2016 we will get back to the deeply twisted political reign of Frank and Claire Underwood for the fourth season of House of Cards. If that’s a little too dark for you, you can wait just a short 7 days and catch the premiere of Flaked, starring Will Arnett on March 11th.

April 1st brings us the star-studded cast of The Ranch. The show will follow the lives of two brothers trying to run a business on a Colorado branch and will star Ashton Kutcher, Elisha Cuthbert, Debra Winger, and Danny Masterson. It will also be prime binge watching fodder, as it will be released as TWO ten-episode batches AT THE SAME TIME!  If humour is your thing, than April 15th will be hard to ignore. The Tina Fey written Unbreakable Kimmy Schmidt waltzes back into our lives with all of its brightly-coloured glory.

May will feature back-to-back releases with Marseille (a French series) on May 5th and the hysterical Grace and Frankie: Season 2 starring Jane Fonda and Lily Tomlin on May 6th. We also can’t forget the much awaited fourth season of Orange Is The New Black on June 17th.

The summer rounds out with two original shows. The first is Stranger Things on July 15th. Starring Winona Ryder, the 8 episode show is set in 1980’s Montauk, New York, and deals with the vanishing of a young boy into thin air. The second might be your GLEE replacement. The Get Down is a musical drama that will air on August 12th and is being produced by Sony.

So basically, if you had any plans to be social and hang out with real people anytime between March and August, you’re sadly mistaken. Thankfully you’ll have so many new (imaginary) friends in your life, that your weekends with Netflix will still be just as fun!

Featured image via screengrab from Netflix