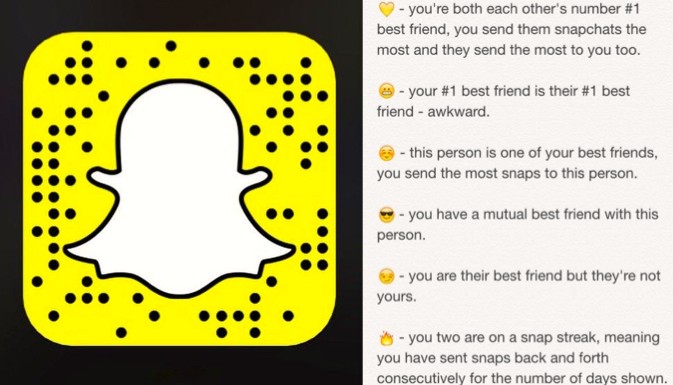 Just as we thought we had escaped the curse of the Snapchat best friends after the developers scrapped the idea back in January, the latest Snapchat update that landed today is a game changer.

The latest update uses our favorite emojis to categorize our friendships with other Snapchat users. The rules below explain the initially confusing emojis that now sit next to your friends list. 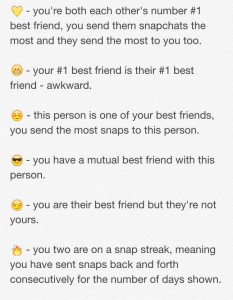 Luckily, this update is for personal use only and unlike the old best friends feature, you can’t see other people’s, only your own (thank god). While this update will no doubt still cause drama, I think we should be thankful it isn’t a public thing, because being able to stalk other people’s Snapchat activity causes all sorts of problems (aka catching your boyfriend cheating).

While it is for personal use, nothing stops people from asking questions. My friends and I have already taken screen shots of our friends list and compared. Then comes the ‘how come you are best friends with so and so?’ or ‘you didn’t Snapchat me yesterday but you’re obviously on a streak with her,’ and the accusations continue to be fired.  Let the obsession with Snapchat activity begin all over again.

A male friend of mine’s initial reaction was – ‘Oh no, a girl can see if I’m speaking to her friends,’ – which not only says a lot about the male species, but also how this update will stir things up in relationships or hooking up once again, as people can discover if their love interest is talking to someone else.

On the plus side, at least this way you know where you stand with your friends or your recent hook up. On the down side, Snapchat will continue to ruin relationships.

Snapchat, we salute you – for getting us all talking again, but really, what next?!