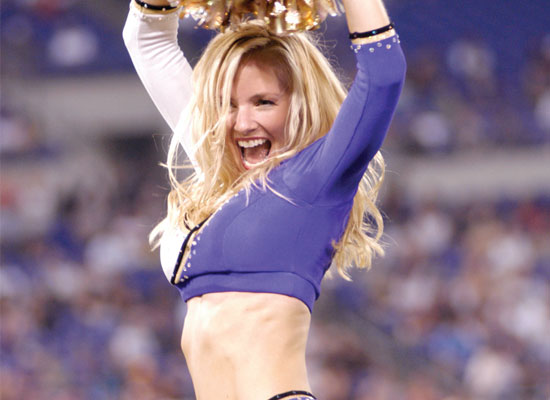 The story unfolding about 47-year-old ex-Ravens cheerleader Molly Shattuck sounds like it should be the plot to a novel, but instead it’s currently the news story that is catching everyone’s attention. Previously known for being the oldest cheerleader in the history of the NFL, Shattuck is now infamous for having sexual relations with a 15-year-old boy at a beach house after getting him drunk over Labor Day weekend.

As a dedicated Ravens fan, I attended last Sunday’s home game with my Dad just as I have many times before. But, this time as we were walking out of the stadium I could not help but hear some of the comments around me. Instead of celebrating the two touchdown win over the Titans, I heard many intoxicated voices saying things like, “Where’s Molly Shattuck, she could do me a favor right now.”

My first reaction to these comments was no reaction at all.  I knew that a 15-year-old boy had been raped, but for some reason it took a second or two to realize there was something very wrong with making light of the situation. I started reading an article on Shattuck,  and as I scrolled down to the comment section I realized the few comments I heard while exiting the stadium were nothing compared to conversations going on all over the internet. These are just a few of the troubling comments I scrolled through:

“Wish I was 15 again. One thing I would not be doing is complaining, rather kissing her all over to thank her for teaching me everything my puritan parents clammed up about.”

“How did a 15 year-old kid not hit that? If I was his Dad I would’ve sent him right back to that beach house, [and say] ‘… don’t come back until you hit that ass!'”

“Where was she when I was a teenager? I certainly wouldn’t have told on her.”

Now, let’s take a moment and pretend the story is different. An attractive 47-year-old ex-football player invites one of his daughter’s friends to a beach house over Labor Day weekend, gets her drunk, and they engage in sexual acts. Something tells me that the comments above would be completely different.  No one would be telling the young girl to “hit it,” and the man in the story would undoubtedly be characterized as a criminal and a pedophile.  So how did we get to this point? Although 95 percent of reported rapes are female, that does not mean the other 5 percent are any less important.

Even the news coverage of this topic is concerning. The Washington Post published an article with the title, “Molly Shattuck: A Baltimore Barbie who wanted to be forever young.” An article in the Daily Beast was entitled, “From Baltimore Ravens Cheerleader to Mrs. Robinson.”  While these articles were meant to make valid points, there is no way the public can take this issue seriously with headlines that provoke a lighthearted reaction. I understand that every publication wants to increase their number of views, and that increasing views includes creating catchy titles, but is that extra 1,000 clicks really worth continuing the stigmas that are attached to gender and rape?

On top of the media coverage, the stereotypical expectations that come with being a male plays a role in the public’s perspective on rape. The concept that males are supposed to be the stronger gender starts from a very young age.  As people get older that turns into the idea that in order to be masculine a guy should be getting with a lot of girls, and it’s become an enticing notion for males to get with the “cougar” or “MILF.” Unfortunately, a young male being raped by an older female does not meet those expectations and it is only causing an inability for many to take this issue seriously.

These stereotypes have for years been perpetuated through many forms of entertainment. The idea of a cougar can be seen back to 1967 with the creation of Mrs. Robinson, and it has only continued with characters like Stifler’s mom in American Pie. The song Stacy’s Mom has remained a gen-y favorite, but this becomes a problem when “Stacy’s Mom” is no longer just a character, but a reality.

Forget Everything You’ve Been Told About Success, And Do This Instead