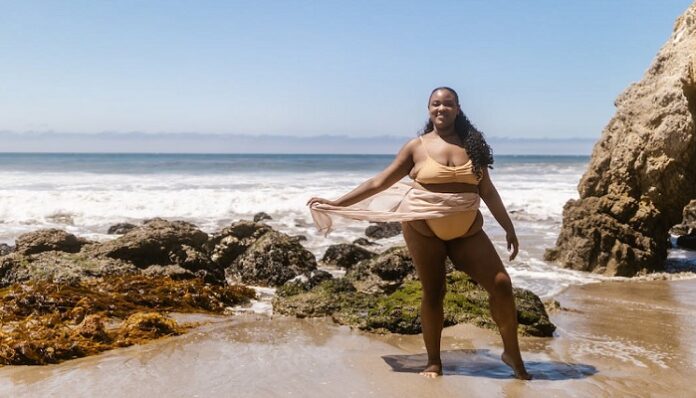 One of the most common things I’ve noticed when reading blogs is how quickly people are to say that plus-size women are “brave” for wearing a bikini, yet a thinner woman is just “bragging” by wearing a similar outfit. Though part of me feels like we should be happy that we’re praising women for their body image and body acceptance, the other part of me feels as if it’s hypocritical.

Though it’s clear that people’s hearts are in the right place, the fact is that this double-standard says volumes about our society as a whole. Here’s why.

1. Confidence in yourself shouldn’t be “bravery.”

Perhaps what bothers me the most about calling people who flaunt imperfect bodies “brave” is that it suggests it’s abnormal to feel comfortable in your own skin. Sure, there will always be people out there who will say terrible things to you, but that doesn’t mean wearing skimpy clothing should be an act of bravery.

It should just be an act of a normal human being that wants to enjoy life. By calling it bravery, you’re giving too much power to the people who tear others down. Besides, reminding people that others may talk smack about your physique isn’t helping anyone.

2. Then there’s the “bragging” versus “bravery” issue.

There’s a huge amount of hypocrisy in praising one person for showing skin, while deriding another for the same deed. Speaking as someone who has been every size from a 00 to a size 18, I can say that it took just as much courage for me to wear a swimsuit as a size 00 as it did for me at a size 18.

Saying that I was “bragging” or “brave” depending on my size and imperfections is just plain rude, shallow, and hypocritical.

3. You can’t tell what others are thinking when they post their photos.

Many people who are rail-thin struggle with their body image as much, if not more than, plus-size women. You don’t know what that size 2 girl is thinking when she’s posting her photo, so why assume that she’s boasting?

Similarly, just because society tells us that we should be ashamed of having a size 14 body doesn’t mean the plus-size girl feels “brave” for posting a photo. Moreover, what’s so bad about boasting about your body, anyway?

4. Body acceptance should come in all sizes.

There’s a big problem in the body acceptance movement when it comes to size. While most in the movement are happy to see people embracing plus-sizes, they often seem angered by those who work hard to keep themselves thin.

Everyone should feel like they have the right to be proud of the body they have, especially if they actually want their body to look that way. By suggesting someone is “brave” or “bragging” for embracing their own appearance, we’re making it an uglier place for everyone.

If You’re Queer And Have Ever Felt Not “Queer Enough,” You...