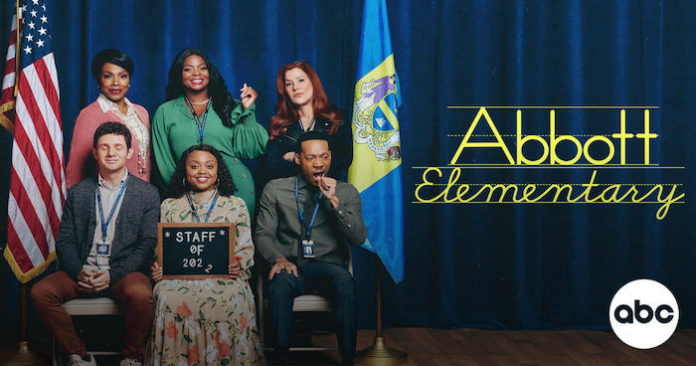 It’s not hard to see why ABC’s new hit sitcom, “Abbott Elementary,” has earned a perfect score on Rotten Tomatoes and has also become the network’s highest-rated TV show. Set in urban Philadelphia, the “mockumentary” focuses on a group of dedicated educators and a slightly ditzy principal — at an elementary school. Despite the difficulties the characters — like many of our country’s educators — face, they are determined to give their students the knowledge and love they need to succeed.

From the minute I saw a commercial for the series, I knew I needed to watch it. Educators are not often portrayed in sitcoms, and when they are, they’re sometimes the butt of the jokes. For instance, I clearly remember an episode of a now-canceled show, “Fresh Off the Boat,” where the mother told her children that  if they didn’t study, their only career prospect would be becoming a teacher. However, “Abbott Elementary” makes it clear that teachers pave the way for people in all. Kudos to Quinta Brunson, the creator and star of the show, for creating such a relatable sitcom that portrays the hard work and dedication of American educators.

The cast of “Abbott Elementary” features almost every type of teacher you will find in a school setting: Janine (Quinta Brunson), the new, optimistic second grade teacher; Gregory (Tyler James Williams), the substitute first grade teacher, who is trying to find his place amongst the Abbott teachers; Barbara (Sheryl Lee Ralph), the veteran kindergarten teacher the others go to for advice and wisdom; Melissa (Lisa Ann Walter), a wise veteran second grade teacher; Jacob (Chris Perfetti), a goofy history teacher who tries hard to connect with his students and earn their respect; and Ava (Janelle James), the principal of Abbott Elementary who doesn’t realize how hard her teachers work.

Season one of the show, which concluded on April 12, had only 13 episodes. However, every one of those 13 episodes truly captured the difficulty and humor of being an educator. The show tackles issues like finding additional funds, learning new computer programs, dealing with disrespectful students, connecting with “work family,” tackling current social media trends, reaching out to parents, and confronting change.

As an educator, I can relate to every episode of “Abbott Elementary.”  In the pilot, Janine asks for additional funds for her classroom rugs, only to find that the mone. Teachers constantly ask for funds or supplies for their classroom and are often denied tha due to restrictions in the budget. In the episode, “New Tech,” veteran teacher Barbara needs to learn the school’s new computer program, which causes extreme confusion and frustration. As teachers, we are always introduced to new programs and curriculum—some of which are good and some of which are not so good. There will always be those teachers who can adapt well and those that wish things would just stay the same. In the episode, “Work Family,” Janine wants the Abbott teachers to think of her more like a member of their family and not just their work family.

Having a connection with your coworkers—thinking of them as your family—is a special feeling. Just like your actual family, a work family will be there to support you, and as educators, we need all the support we can get. In the episode, “Open House”, Janine desperately hopes that the parent of one of her students— one who is struggling— shows up so she can discuss the issues she is having with her. Despite the lack of communication and what Janine feels is a negligent mother, she learns the mom is a nurse and appreciates everything she has done for her daughter. As educators, we will always have those frustrating parents who deep down do appreciate everything we do for their children. In the episode, “Desking”, the teachers deal with the latest social media trend “desking”. The students find it cool to jump from desk to desk around the room. That is until Jacob begins doing it to be cool, which results in the trend dying at Abbott. As educators, we need to stay abreast of the new trends and, once we know them, or begin to do them, they die down. In the final episode of the season, “Zoo Balloon”, Janine helps a student who is afraid to come to second grade. Facing fears of her own, Janine is able to get the boy to realize that change can be good and not something that should be feared.

To be an educator is special. Teaching is not easy and it is definitely not for everyone. Those who dedicate their lives to shaping the future should be honored and admired, because it “sho ain’t the money” they are doing it for. If you haven’t checked out “Abbott Elementary”, stream it today and watch out for Season 2 coming later this year! This teacher gives it an A+!

6 Ways You Could Be Smarter With Your Money