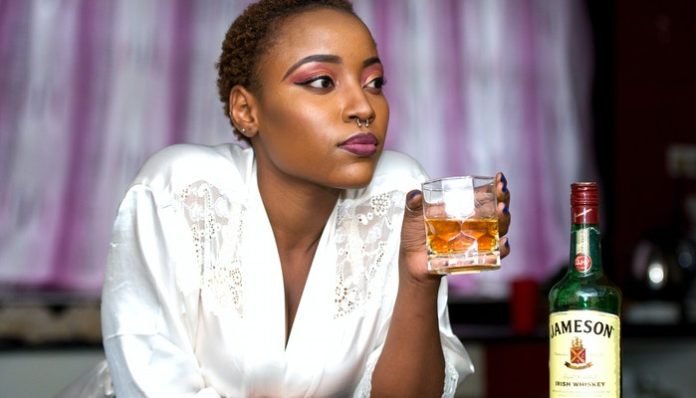 Believe it or not, it’s a word that you can use other than describing your friend’s stamp collection. In the lexicon of the bartender, It means no ice. That’s it. In one word, you can succinctly say: “Just pour the liquor from the bottle to my glass, please.” No “shaking it off” in a mixer for chilling, or whatever it is the kids today are doing. It’s also how I drink my whiskey, specifically scotch. You can call me old-fashioned if you want (old-fashioned as in traditional, not “old-fashioned” as in the whiskey cocktail made with muddled fruit and club soda).

But having been a bartender for ten years, I’ve noticed “neat” drinks are a rare request. Even rarer is a woman who requests one. While most girls are chasing the next en vogue flavored spirit, figuratively and literally (if you’ve done a shot of Fireball recently, yes, I’m talking about you), there are still a few of us who prefer to taste the liquor as it was intended: Raw and pure. Harsh but true. Dangerous and delicious. Coincidentally, these are the same traits I admire in a woman. So, in light of the classic maxim, “you are what you eat”, I believe the same holds true for what one chooses to drink. And there’s nothing “neater” to me than a woman who drinks whiskey. Here’s why:

1. She can handle her liquor (and herself).

I can’t tell you the countless number of times I’ve served up Margaritas and Daiquiris and Pina Coladas (oh my!) that inevitably ended up in a night of hysteria and lost cell phones. First off, the problem with these drinks is the sugar content. Sugar increases the absorption rate of alcohol into the body and will get a person drunker more quickly. Secondly, often times these house drinks mask the taste of cheap, poorly crafted well liquor (how do you think the bar turns a profit on “Nickle Shot” night?)

Yes, they might taste good going down but so does fruit punch flavored cyanide. “Basic” girls will flip-flop between different cocktails without any pace and then it’s only a matter of time before the bar floor becomes a flood of glitter and tears. Girls who drink whiskey tend to stick with whiskey the entire night and, therefore, are able to pace themselves, control themeslves, and dictate how their night ends.

Whiskey encompasses a whole spectrum of varieties and flavors. It can be bourbon (for example, whiskey made in a bourbon fashion can only be called “bourbon” if it’s made in Kentucky), Scotch (you guessed it; has to be made in Scotland), Canadian, Irish, American, etc. Even then, there are different sub-categories depending on the recipe and ingredients.

When a woman is specific to a particular brand or type, you better believe she knows what she wants and why she wants it. This knowledge can only come from experimenting and experience, you know, the same things scientists are known for. Furthermore…

3. She’s easy to talk to AND is interesting.

I’m aware most of these descriptors are blanket statements. But keep in mind that successful gamblers who make a living out of counting cards in blackjack are only tipping the house odds roughly one percent in their favor. Similarly, I’m just flipping the odds in your favor.

You know how I know whiskey drinkers are intellectual conversationalists? Frequent conversations with many smart women over the years. Their drink of choice? Jameson. Coincidence? I think not.

4. UNLESS SHE DRINKS CHEAP WHISKEY. THEN BUYER BEWARE.

This girl is crazy, reckless and will break your heart. She’s that summer lightning storm that leaves just as quickly as she arrives. She’s fun to watch and even harder to keep up with. If you’re willing to pay the price, by all means.

5. She’s not afraid to be different and take risks (AKA: She’s a freak in bed.)

I once hooked up with a girl that yelled at me when I accidentally made her a drink WITH ice. I’m not kidding. When I handed her the scotch (Johnnie Walker Gold), she looked directly into my eyes and asked: “Why the hell did you put ice in my glass?” She had also just recently returned from backpacking Europe after having just quit a highly successful nursing job to do so (who does that?!)

Fast-forward to the bedroom an hour later and her riding on top of me. To my complete surprise yet utter delight, she started to choke me. Her idea; I didn’t even hint at it. (Don’t be alarmed; it wasn’t anything that required a safety word or the Heimlich.) But it was still awesome and unexpected.

6. She doesn’t give up easy. Or probably ever.

Let’s be honest. Whiskey is an acquired taste. Like coffee, the comedy of Ben Stiller and Breaking Bad, it takes several attempts before your tastebuds stop hating on you. In the end though, it’s completely worth it (although I’m still struggling with Ben Stiller movies.) A girl who drinks whiskey accepts the challenge and it’s a direct reflection of who she is as a person: committed to achieving a goal and not stopping ‘til she gets what she wants.

Seriously – do you need a reason other than that? I know I don’t.

So next time you find yourself sitting next to a guy at a bar and you want to get his attention, forget the glitter. (This is life; not art class.) Request a single-malt Glenlivet “neat.” Trust me when I say there’s no better way to break the ice than to order a drink without one. Chances are, if it’s me you’re sitting next to, I’ll buy you one. Like I said, I’m old-fashioned. And with that order, my dear, you couldn’t possibly be any sexier.

I Got Married At 19 And Blamed My Husband For My...

A Muslim Woman Made Me Cry At The Grocery Store