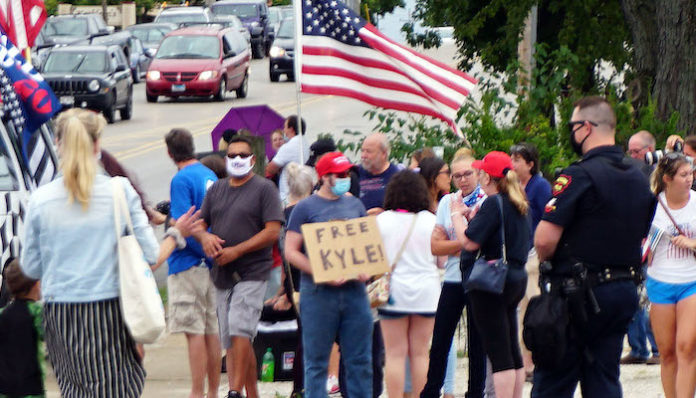 In August 2020, then-17-year-old Kyle Rittenhouse shot and killed two men at a protest against the police’s murder of Jacob Blake.  Rittenhouse carried an AR-15 that someone else bought for him because he wasn’t old enough to buy a gun himself. That friend accompanied Rittenhouse to downtown Kenosha to “protect a car dealership” where protesters gathered.

While there’s no evidence that Rittenhouse was part of a White supremacist group, racism is a hot topic in the case.  On November 19, a jury found Rittenhouse not guilty of all charges. Since then, a number of Republican leaders remarked that they’d love to hire Rittenhouse as an intern in their offices.

The Rittenhouse case stands in stark contrast to Cyntoia Brown’s murder case. At just 16 years old, Brown was raped and killed her rapist in self-defense. After Brown was convicted of first-degree murder and aggravated robbery, a jury imposed a life sentence. Cyntoia Brown spent 15 years in prison. She fought for her freedom every day.

The jury refused to consider that Cyntoia was the child of an alcoholic and had Fetal Alcohol Syndrome herself. They didn’t use the abuse that Brown suffered after she ran away from home as a mitigating factor in the killing. The jury didn’t seem to acknowledge that Cyntoia was forced into protitution, which led her into the encounter in which she killed a man.

In 2019, Cyntoia was granted clemency and was released from prison, but it was too little too late. Brown had already lost crucial years of her life to her time in prison at the hands of a flawed justice system.

So why did Kyle Rittenhouse get off scot-free?

The justice system is full of racial disparities. According to the American Bar Association, Black people make up 47 percent of wrongful conviction exonerations and 35 percent of those executed by the death penalty. African-Americans are also sent to state prison five times more than White people are. Furthermore, because of the school-to-prison pipeline, Black students are disproportionately punished for minor infractions. This increases their likelihood of ending up in prison later on.

Kyle Rittenhouse is just one of millions of people who benefit from a system that’s built to work for them. Judges’ political leanings and descriptions of the victims as “rioters” or “looters”undoubtedly contributed to Rittenhouse’s unfair trial outcome. It’s hard to say that the Kyle Rittenhouse trial was fair and impartial. Rittenhouse shouldn’t be a free man today.