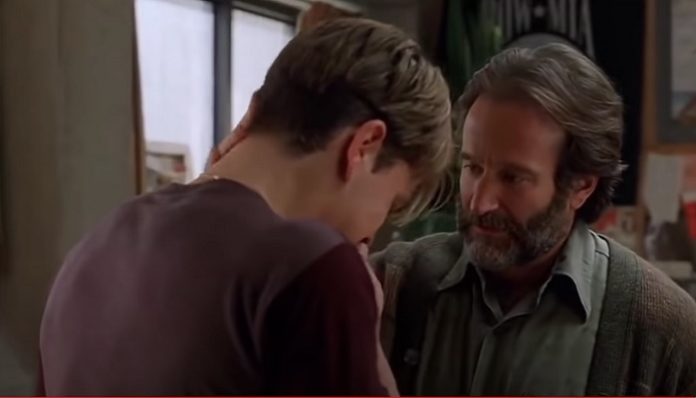 Movies often portray men as being tough and emotionless. As a result, it is rare to see men cry on television, let alone in real life. Instead of crying, we watch men break things or release their anger towards others or turn extremely stoic whenever they’re experiencing negative feelings. However, this is not reality. Men have emotions, but they experience pressure to be “men,” which means being tough and never cry. Here is a list of movies that depict male vulnerability:

This movie focuses on four young boys. It shows them traveling together and experiencing raw emotions. It also depicts how these young adolescent men experience emotions and cry when they realize how corrupt the world is. I was really blown away by all four of the boys’ performances. I was used to seeing young boys and men as insensitive, but I was wrong.

My favorite scene from this movie is when Chris (played by River Phoenix) tells his best friend, Gordie (played by Will Wheaton), that Chris and their two other best friends will part ways and not achieve anything because they don’t feel that they are good enough. He even encourages Gordie to be successful, telling him he is too good to be associated with “losers” like them. This makes Gordie sad because he found consolation with his friends when he felt alone, due to his parents’ neglect of him and his older brother’s death. This movie reminded me that boys have their personal turmoil and struggle with being tough when they’re really vulnerable and need their pals.

This movie is claimed to be the epitome of how it portrays toxic masculinity. Edward Norton and Brad Pitt spend the movie forming a fight club that allows men to beat each other up to release pent-up feelings about emasculation. Even though this movie shows men being aggressive towards each other, it shows that each man has a sense of vulnerability because of the everyday pressures they deal with, such as materialism and the need to appear tough, that they forget what it means to be a “real man.”

There is one particular scene that shows male vulnerability in this film. It’s interesting since Arnold Schwarzenegger’s character spends almost the entire movie attempting to kill Linda Hamilton’s character, Sarah Conner, without remorse, while Michael Biehn’s character Kyle Resse protects her. When Kyle and Sarah are hiding out in a motel, they talk about his life from the future and how he deals with the hardships of being a soldier. Even though he says he “disconnected” himself from “pain,” he still admits his feelings for Sarah, and he traveled to the past to save her from The Terminator.

This movie highlights not only the titular character’s troubled life but also his difficulty with his relationship with Skyler (played by Minnie Driver) and his inability to apply himself, regardless of his brilliant mind. The first example of male vulnerability in the movie is Sean’s (played by Robin Williams) most famous monologue, in which he talks about his love for his wife. Another example is when Will breaks down after years of built-up pain when Sean tells him “it’s not [his] fault,” and they both hug.

This iconic Christmas movie is so well-received because it was one of the first films to depict male mental health, which was very rare for Hollywood. While dealing with financial pressures at work, instead of going home, George (played by James Stewart) goes to a bar and prays for a miracle. This shows how he, like every man, refuses to express his emotions because he is expected not to. They just suffer in silence. Regardless of George’s crisis, the angel then reminds him of the good things he does and how much his family loves him. He also realizes what would happen to everyone if he wasn’t there at all.

There are plenty of other movies that depict male vulnerability. I think the movies I listed are strong depictions of toxic masculinity. This list is your start to understanding men better.

6 Things You Need To Do On Your Mission To Love...