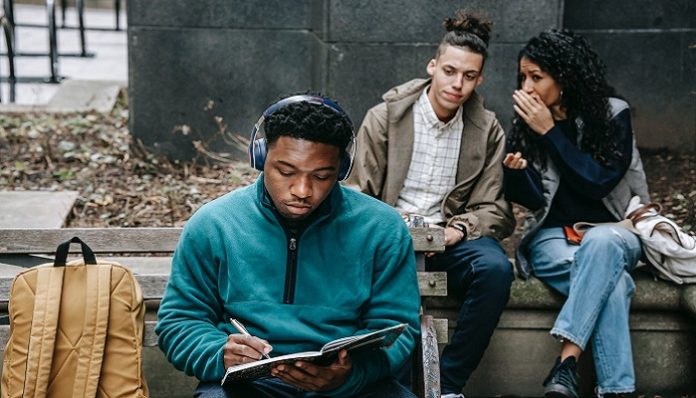 I was recently scanning through the world’s favorite pastime (Facebook, of course) and saw a post by one of my gay friends. That boy had called forth his inner diva and was on a roll about the stigma towards people with HIV and how people are judging that.

I commend him for being so forthright about his status, but it also made me realize something. The way he was talking about the stigma of his illness applies to so many people of all different conditions. Stigma truly causes one to believe they’re damaged goods, unclean, and not worthy. It degrades and erodes our self-esteem until there’s nothing left. Judging everyone is something that we have to stop.

I began to realize something: We’re all under the belief that in some way we’re infected, we’re damaged, we’re not good enough. And we see others this way too. We’re infected with beliefs that because of how someone is different from us that they deserve to be separated from the crowd—contagious disease or not!

Ironically, as I talked to my friend about his status, his life, and the situations he faces as an HIV+ person, I realized I was infected, too.

Or rather, because of who I am, I appear infected to others.

I began to realize the thoughts my friend was sharing about the stigma he carries align with the way I think about myself and my own burdens.

Then, I constantly find myself having to explain myself to yet another person. I wonder if people are going to be respectful to me because of the infections I carry forward brought on by my life experiences.

I dread the conversations that begin: “I like you, but you’re … divorced, got kids, overweight, bald … yada, yada, yada.”

My friends’ HIV+ status reflected back to me like a mirror. I saw the same fears, behaviors, and words that come with a stigma. We all push and pull at each other. We think we’re not good enough and simultaneously treat others like they’re not good enough either—as if normalcy of humanity actually exists.

As he continued to share his truth — his journey — with me, I became queasy, angry determined to rid stigma from my life.

Through his hardships, I realized the pain of coming out to live your truth is universal, not personal.

In the sandbox of life, stigma, and hypocrisy grow out of the seeds of naivety. They come from a lack of education. They sprout from personal insecurities.

We project towards others these unflattering character flaws. We lead the “infected” to often feel they have to hide their truth or isolate themselves.

In the worst scenarios, we tell them to completely remove themselves from the human experience.

My friend told me that at times he felt the need to hide his status to feel whole, loved, and desired. That approach worked… until it didn’t. He finally stood up to his shame and confronted it, finally realizing it wasn’t shaming. It was the stigma and others judging him about his status driving his actions. He wanted control of those actions back and he finally overcame the shame.

When you do the same to your own stigmas, you find yourself suddenly faced with introspective questions:

• Why am I really hiding this part of me?
• What good is this type of behavior doing for my self-esteem?
• How might my life be different if I came out of this new life closet of being HIV+ and owned it — no guilt, no shame?

I knew I was entering the inner vortex of self-discovery to unearth answers as to why I inflict stigmas upon myself, and others.

I also realized that there is a healing cocktail to cure the infectious diseases of stigma, hate, and intolerance, and others judging us. It isn’t a cocktail that you drink or a cocktail of drugs prescribed by a physician. It’s a simple cocktail of consciousness and self-awareness.

Stigmas we throw upon others mirror the stigmas we haven’t come to terms with about ourselves. HIV is a life-changing disease. It’s not an invitation for hypocrisy, hate, or discrimination. Think about that the next time someone calls you stupid, fat, ugly, or damaged goods. And remember: The stigma thrown upon you is just as damaging as the stigma of HIV!

7 Tips To Finding Peace When You Feel Overwhelmed