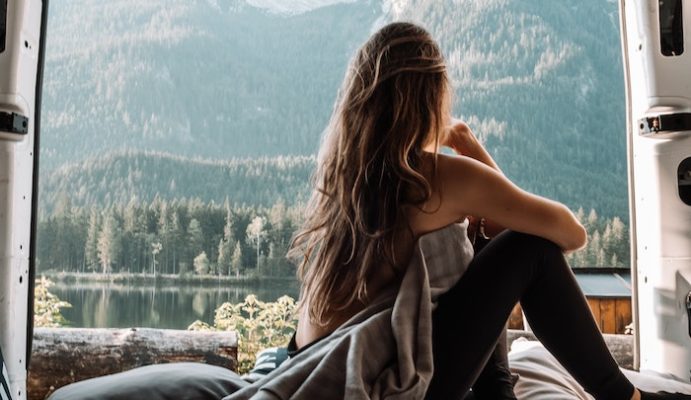 The Friday before Memorial Day is National Road Trip Day and serves as the official kickoff of the summer road trip season. Millions of Americans hit the road each year over the long weekend, visiting friends and family while paying tribute to our American heroes. We pack up, fuel up, stock up, and then crank up the tunes. Whether we’re seeking adventure, visiting family and friends, or making a business connection, road trips are often a rite of passage. Sometimes we endure them, and other times we never want them to end.

In honor of National Road Trip Day, I’d like to share a time I jumped in the car and just started driving west.

The monotony of the pandemic finally got to me after months of remaining trapped in my Detroit home. So I packed up a carry-on, bought some snacks from Kroger, and filled up my tank. I made sure the compass displayed “West,” and I just started driving.

I wandered around the little town by foot, first visiting an art museum which displayed originals from Grant Wood (American Gothic). I visited the Newbo City Market which had an incredible outdoor seating area, cute shops, and delicious restaurants. Then I walked up and down the rows of stores for half an hour before finally deciding to order Chicken Tikka Masala tacos.

However, a store called Rayburn ended up being the highlight of this stop. It offers unique tchotchkes like shot glasses, t-shirts poking fun at Iowa, and less-than-appropriate mugs. I collect shot glasses from every place I visit, so I couldn’t resist the “Iowa – 75% Vowels, 100% Awesome” glass.

The next day I continued my road trip with a stop in Des Moines.

I heard about an outdoor art and sculpture garden, and it did not disappoint. While there, I tried Fong’s Pizza, which has super unique drinks in tiki glasses as well as pizzas like egg roll, street taco, and Thai chicken. Full and bloated from eating an entire pizza, I waddled over to the Pappajohn Sculpture Park and listened to the audio guide on my phone and conducted a solo photoshoot.

Determined to further eliminate the pandemic’s boredom, I hopped over to Omaha, Nebraska next.

The first stop had to be the famous Omaha Zoo, where I only saw 10 people wearing masks. They had okapis, giraffes, gorillas, and penguins. I spent an hour staring at the penguins, watching them dive into the water, sit under the snow machine, and hop along the rocks.

I would be doing Omaha a disservice if I didn’t mention the Old Market, which is an extremely walkable collection of shops, restaurants, stores, candy shops, and bars. While there, I had sushi for dinner because the middle of the country has to have the best fish, right?

Again I hopped back in my car and drove to Kansas City, KS to pick up some barbecue from Joe’s Kansas City.

I enjoyed the Z-Man sandwich which is brisket, provolone, onion rings, barbecue sauce – all on a Kaiser bun. I purchased an entire bottle of the sauce because it was some of the best I’d ever eaten.

On the Missouri side of Kansas City, I cannot recommend enough Christopher Elbow Chocolates. While pricey, they have some of the most unique bars I’ve ever seen. I also went to Gates BBQ and felt overwhelmed by regulars who yelled out their order over the counter, quickly paid in cash, and jetted to the outskirts of the room while the employees assembled their plates.

While in Missouri, I visited my brother who is working on his master’s degree at Washington University in St. Louis. We visited another outdoor sculpture garden before taking pictures in front of the Gateway Arch. We visited Forest Park and the free art museum, which had paintings by Warhol, Rothko, and Van Gogh. I could have easily spent an entire day looking at the artwork, but we ventured to get some barbecue before retiring to bed and the anticipation of an eight-hour drive back to Detroit.

The Midwest is known for its flyover states, but when you go on a road trip there, don’t sleep on some of its hidden gems. I’m happy my spontaneity introduced me to states I might never have gone to were it not for my restlessness and desire to see the outside of my friend’s apartment.

Photo by Alex Azabache on Unsplash

8 Little Things In A Relationship That Add Up In A...

4 Thoughtful Gifts To Send To Your Long Distance Partner