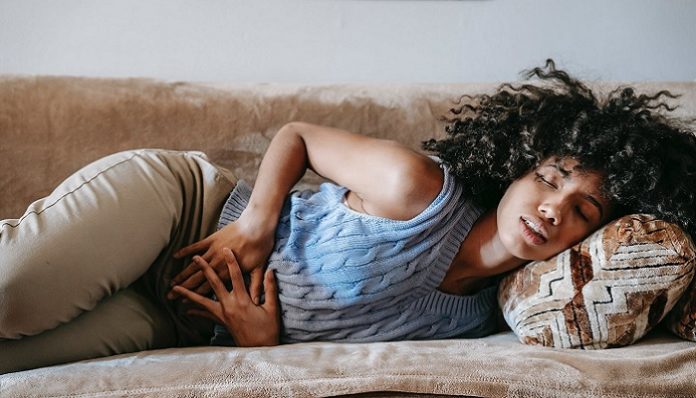 Many blame it on premenstrual syndrome (PMS symptoms). According to Jill Hechtman, MD, Medical Director of Tampa Obstetrics, “These symptoms are related to elevated levels of prostaglandins in your system. The prostaglandins cause an inflammatory response in the body and this is why people feel flu-like.”

But what does that mean?

What is period flu?

Period flu isn’t a medical term; however, it means experiencing flu-like symptoms before your menstrual cycle. Symptoms can be both physical and emotional. They can make the woman feel like she actually has the flu, even though she doesn’t.

Because the condition is very misunderstood, doctors sometimes group period flu as related to PMS.

How long does period flu last?

Period flu normally doesn’t last for more than 2 weeks. The symptoms usually start after ovulation (when estrogen and progesterone change levels), occurring in the last 2 weeks of an average 28-day menstrual cycle.

It’s actually not uncommon to have some flu-like symptoms with a period, but that won’t always be the case.

Period flu symptoms are almost identical to those of regular influenza, which include fatigue, nausea or vomiting, headache or dizziness, and constipation or diarrhea.

Gynecologist and Women’s Health Specialist, Padmavati Garvey, MD, explains, “When the uterine lining is shed, a number of hormones are released called tumor-necrosis factors (TNFs). These compounds cause flu-like symptoms that are typical before the menstruation starts, like muscle aches, headaches, and so on.”

Garvey says that this is very common among women, who can sense their period is about to start because they feel the symptoms.

So, while experts aren’t entirely sure what causes period flu, many believe it’s due to hormonal changes, particularly estrogen and progesterone. Other causes can include changes in serotonin levels, progesterone affecting neurotransmitters in the brain, or a sensitivity to substances.

Here are a few additional reasons you could be experiencing flu-like symptoms before or during your menstruation:

“At the time of a period, the uterus releases a chemical known as prostaglandin, which is the ‘lovely’ chemical that makes us have menstrual cramps (it contracts smooth muscles),” says Dr. Mary Jane Minkin, one of the leading gynecologists in the country, who currently sits on Vagisil’s vSHEC Council.

However, it can also contract the smooth muscle of the stomach and intestines, giving us nausea and diarrhea. The hormone levels in our bodies are typically changing during ovulation as well, which is when symptoms start occurring. For example, the estrogen levels fall and progesterone levels rise.

Premenstrual Dysphoric Disorder (PMDD) is a severe case of PMS. PMDD symptoms occur a few days to one week before your period starts, and ends a few days after the start of your period.

Symptoms can include moodiness, insomnia, trouble focusing, feelings of depression and anger, irritability, bloating, nausea, constipation, acne, headache, swelling, infection, allergies, appetite changes, and paranoia. The exact cause of this disorder is unknown, but experts have theorized that it’s an abnormal reaction to the shift of hormones every menstrual cycle.

If you get these symptoms every period, you aren’t getting the flu every four weeks. But if you’re clocking a high temperature right now, chances are you have the flu and it’s just overlapping with your period.

“A fever that is an elevation in body temperature above 100 degrees Fahrenheit would be a sign of actual infection, most typically a viral infection. So if a woman has an actual fever, then she may be dealing with a cold coming on rather than symptoms due to her period,” warns Dr. Garvey.

How to Treat Period Flu

Before you panic, there are a few things you can do to alleviate your flu-like symptoms and find some relief.

“In some women, we recommend taking anti-inflammatory medications like Naprosyn/Anaprox,” advises Dr. Hechtman. This medication helps blocks the inflammatory response.

“In women who have severe symptoms, we can place them on hormones (like the birth control pill) to prevent this,” Dr. Hechtman adds.

Decreasing the number of periods a woman has can decrease these flu-like symptoms. So, according to Dr. Hechtman, “You do not need your period monthly, and when women have negative effects from their period, eradicating it helps tremendously!”

Period flu is more common than you think. So if you experience any of the symptoms above, consider making some changes!