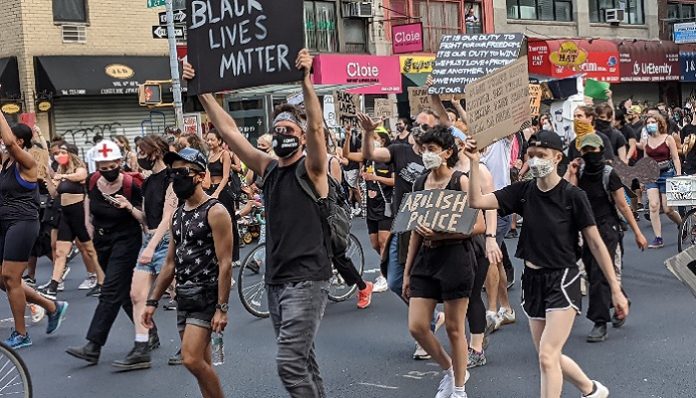 In a year filled with a pandemic, economic uncertainty, and political turmoil, Americans are experiencing one of its racist pillars again — the terrorizing of African Americans by the police. In a seemingly endless barrage of police killings, including George Floyd in Minneapolis and Breonna Taylor in Louisville, Kentucky, the country exploded into uprisings throughout the entire world during summer 2020. Protests, police departments in flames, and cries for justice played out on television and social media.

Sunday, April 11, 2021, brought another tragedy. A 20-year-old Daunte Wright of Brooklyn Center, a suburb of Minneapolis, was shot and killed during a traffic stop. Reports state that officer Kim Porter accidentally fired a shot into Wrights’s chest. This killing echoed the one of Oscar Grant, who a police officer shot and killed in 2009. The cop claimed that he thought Grant was holding his taser.

All of these deaths of unarmed Black people make up an institution that has shown nothing but contempt and disdain for African-Americans.

Tired of being asked to have patience with a system that targets Black men, activists are proposing more aggressive solutions. One of them is to “defund the police.”

The term “defund the police” essentially means to divert some or all of the funding from police departments to other crime prevention methods.

Organizations that support mental health, house the homeless, treat drug addiction and provide community violence intervention are many initiatives that could receive the money to defund the police. For most activists, the purpose of defunding the police is not to eradicate law enforcement. Instead, it’s to show that there are alternative methods to fighting and preventing crime.

While the movement has gained prominence in 2020, the concept of defunding the police has existed for many years. That’s because the history of law enforcement in the U.S. is inherently racist.

There’s a history of policing as an anti-Black institution.

Slave Patrols, which many believe to be one of the first forms of law enforcement, began in South Carolina in 1704. Their job was to Control the movements and behaviors of enslaved populations. This means Slave Patrols hunted down runaway slaves, disciplined them, and returned them to their enslavers. They also invoked fear into any enslaved people who were thinking of revolting.

This practice lasted until the Civil War ended. But terrorism against Black people continued with the Black Codes, local and state laws that restricted where the formerly enslaved could work and live. If African-Americans were suspected of not working or “being in a place they shouldn’t have been,” they could be arrested. Or worse.

As an African-American male raised in the inner-city, I have never seen police as a force for good.

As I would ride my bike, I would see cop cars slowly drive past and give me a mean stare. When my friends and I would walk home in the evening, we would tense up when a patrol car rolled past us. There was always a friend who said, “They just started f*cking with me for no reason.”

When I turned 16 and got my driver’s license, my mother gave me “The Talk”: a conversation many parents have with their Black children. She knew that since I was driving, the probability of run-ins with the police would be much greater. So my mother gave me advice on how to act when a cop pulls me over.

“Be polite,” she told me, as generations of mothers have told their Black sons. Answer with a ‘yes, sir,’ ‘yes, ma’am.’ Don’t make any sudden moves. Keep both hands on the steering wheel at all times. Black mothers designed these precautions to reduce the likelihood of their sons’ deaths.

When I would get pulled over, nearly every time, I thought that it could be it for me. I cannot describe the fear and anxiety of a Black man being pulled over by law enforcement. If you’re not Black, you should take some time and think about that. If the police stop you for any reason, that could be the last thing you do.

The pushback against “defund the police” is growing for different reasons.

For many Black communities, the police are an oppressive force. A force that, for generations, has discriminated, unlawfully arrested, assaulted, robbed, raped, and murdered us. In all of my time, I have had maybe two positive interactions from police out of dozens of negative ones.

White communities see the police as protectors and heroes. They have the privilege of seeing the police as a group that exists to enforce laws and maintain order. These days, the police focus on shielding white people from the Black “thugs” whom white people believe to want to destroy their property and attack them.

Critics of the movement describe a country with a defunded police system as lawless.

Former Secretary of Housing and Urban Development Ben Carson warns that everybody will arm themselves and hire vigilante groups for protection. He insists the nation will turn into chaos. Former President Donald Trump charges the idea as “radical” and anti-cop. Another former president, Barack Obama, dismissed “defund the police” as a “snappy slogan” and said that “You lose a big audience the minute you say it.”

Those who champion defunding law enforcement point to improving the conditions of the communities that the police patrol. Job creation, social services, and violence de-escalation organizations would receive the monies that regularly go to police agencies.

What can we do to reduce the harming and killing of Black men by law enforcement other than to “defund the police”?

But bias training isn’t proven to eliminate or even reduce racism. An NPR headline explains that “implicit bias changes minds, not necessarily behavior.” In that article discussing implicit bias training with police, Joshua Correll, an associate professor of psychology at the University of Colorado commented, “Expecting that we can take people in and train them to reduce their implicit bias — I don’t think that has been supported by the literature.”

In my opinion, what implicit bias fails to address is the systemic over-policing and abuse by the police African-Americans have faced for hundreds of years.

Human Rights Watch, an organization dedicated to investigating abuses of communities around the world, reports that while white people use drugs at a rate of five times more than Black people, Black men are sentenced to state prison at 13.4 times greater than white men.

If there was one glaring example of how broken the system of policing is, the Capitol Hill riot in Washington D.C. on January 6, 2021, is a perfect example. Hundreds of white, pro-Trump supporters descended on the federal building. They stole and destroyed property in a protest against the certification of President-elect Joe Biden.

This is a stark contrast to how Black and other people are treated at protests against police terrorism. Very few photos show the rioters harmed by the police. However, bloodied bodies and injuries are the norms during marches for the killing of unarmed Black people. Reading the reports of siege, I said, “If this were Black folks, they would be shot en masse.”

As I grow older, I worry about the generation of Black boys and girls that come after me.

Will they get a chance to live in a world where they don’t have to fear “our protectors?” At this point, I believe that training and fixing the issue within law enforcement isn’t possible. We need to try something else. Between 2014 to 2019, nearly 1,662 Black men and 72 Black women have been killed by the police.

Is defunding the police a viable solution? I don’t know.

However, what I do know is that the attempts of reform have not worked. Policing in the United States of America is an inherently racist institution. It was born out of slave patrols; you cannot reform that.

I was always taught that when a tree is bad, you rip it up by the root. It won’t get better, it will continue to grow rotten fruit. There’s no trust between the Black community and the police. And I believe we can’t do anything to change that.

The Only Person Holding You Back From Your Goals Is You