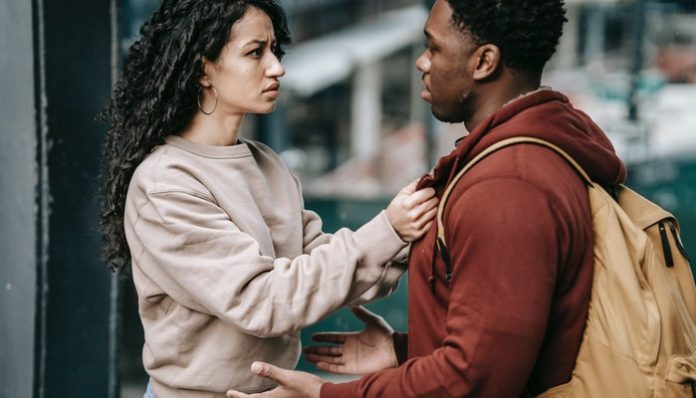 It’s said that, as women, we are gifted in our abilities to instinctively sense when something is wrong. If you’re honest with yourself, there may have been a few red flags in the beginning if you’ve fallen for a guy who’s not over his ex.

But sometimes, love drapes a cloth so dark over our eyes that we ignore even the most obvious warning signs and red flags.

You ignore signs that he still loves his ex-girlfriend, like when her name comes up a lot, he says he’s still angry at her or mourning her, he doesn’t bring you around his friends, he somehow compares you to her, or your intuition simply tells you something is up.

But wouldn’t it be splendid if you could avoid that heartbreak and prevent the humiliation of being his rebound by paying closer attention to a few of your boyfriend or husband’s habits? It’s never too late.

Here’s how to know if your boyfriend still has feelings for his ex and doesn’t want a relationship with you.

1. Every little thing reminds him of his ex-girlfriend.

Imagine this: you get all dolled up and meet him for a romantic dinner, and the moment your food arrives, he comments that his ex-girlfriend always ordered the very same item.

You let that slide, but as the evening progresses, the references just keep increasing; when the night ends, you probably know more about her than you know about him. This is surely a sign that she is always on his mind.

If you continue dating him, you might see that he finds excuses to talk about her and casually slips her name into every conversation you have. You don’t need to be okay with this because it is not okay.

2. He talks about her when you’re in bed.

Even if you forgive him for ruining dinner, talking about her while getting physically intimate is a big deal breaker.

There is nothing creepier than reminiscing about being inside her while he is inside of you, or telling you about the “cool stuff” she taught him.

3. He tells her things before he tells you.

Whether it’s a new job, a promotion at work, or even something as innocuous as getting a haircut, you should be the one to know about it first. But if he tells her before he does you, then things are definitely fishy. If you complain, he will bring up the age-old “but she is still one of my friends” excuse.

Is it OK if he still talks to his ex? In some cases, yes, especially if they were friends before they started dating, or if you get along with her on a genuine level. Otherwise, there’s no need for your boyfriend to tell his ex information that you should know first.

4. He listens to songs about lost love and spews hateful things about her.

Your music preferences can say a lot about your state of mind.

If he keeps listening to doleful songs about past lovers, he’s the quintessential lovelorn swain. Now, the moment you make a joke about this, he will get immensely angry and say the meanest things about her.

Don’t be fooled by his apparent animosity. He only says those things because he can no longer be with her. Grapes are sour, remember?

5. He stalks her obsessively on social media.

Liking her photos is not a crime, but if he keeps liking everything she posts, no matter how inane or stupid, and keeps tabs on her activities across all social media platforms, he has not forgotten her.

This becomes especially apparent when he does not do the same with your posts and fiercely defends himself (“I liked it because she said something intelligent!”)

6. He still has photos of all his other ex-girlfriends — except her.

Maybe he’s the kind of person who remains friends with his exes and adorns the wall with their photos.

If that’s the case, why is her photo absent? It could be because he harbors feelings for her and looking back on memories they shared is nothing short of painful.

7. He behaves weirdly when talking to her.

He talks to all his friend in front of you, but when she calls, he slinks into the nearest empty room and locks the door.

If you try to hear what they are talking about, you cannot. He will whisper like he’s finalizing a clandestine deal. Once the call is over, he will be distant and distracted and even act jumpy if you ask him about it.

8. He gives her personalized gifts for her birthday.

Birthday gifts are normal, but not if he’s giving her something that has special meaning. It’s even worse if he gives her something that belongs to him — like his t-shirt or a photograph of the two of them with a personal message.

If this happens, you may find yourself wondering, “Should I date someone who still loves their ex?”

If it’s gone this far, with him still talking to her, stalking her on social media, and discussing their prior intimate life, it’s worth deciding if this is the relationship you want to stay in.

He will continue visiting her family or engaging with them on Facebook. He will have conversations about her with her mother, share secrets with her brother, and continue schmoozing her father.

This is one of the major signs he still loves his ex and is merely finding ways of being a part of her life in some way.

10. He cries and tells you about his feelings for her when he’s drunk.

Drunk dialing and texting are common, often harmless things. Taking things one step further, he will cry and pour his heart out.

You might think he’s inebriated and therefore his words mean nothing. You might even console him and tell him you’re there for him. But pay heed to all that he says.

These signs he still loves his ex are heartbreaking for any girlfriend to experience, and you may ask yourself, “How do I get him over his ex-girlfriend?”

The truth is, it has more to do with him than it does with you. You can give him a chance to talk about how he feels, listen to him or support him, but there’s only so much you can handle before you decide to find someone who will make you a priority.

You’re Not Responsible For Other People’s Happiness