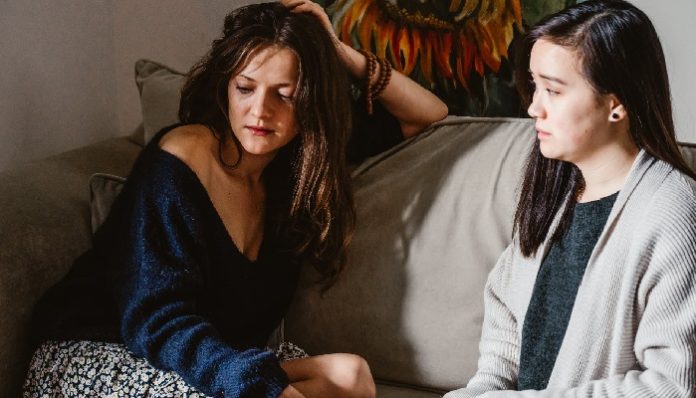 For as long as I could remember, there were two versions of mothers-in-law. The first was the kind that helped plan your wedding; the kind you drank wine with, laughed with and smacked her son in the back of the head when he said something fresh to you. I dated a guy with that mom. The second was the kind from a horror movie, or like Jane Fonda in that J.Lo movie. I married a guy with a toxic mother-in-law.

There was tension between my boyfriend’s mom and me that seemed to have appeared overnight during our dating years. One day we were fine; the next, I was pretty sure she was trying to kill me with her steely gaze and telepathic brain waves. She would throw jabs and emotionally break my ribs. And although I’m not one for holding my tongue, I never quite felt like I had the right to throwback in this situation. After all, she was someone’s mom — specifically, my boyfriend’s mom — so for all of those dating years, I swallowed most of my anger.

We found out I was pregnant a few weeks before my now-husband proposed. Around the same time, we had also decided to move abroad. Hope floated; maybe a baby would warm her heart or help mend the barb-wired fences. Perhaps distance could help the heart grow fonder?

As years passed, each visit began with the hopeful thought “Maybe we’ve turned a corner” and ended with “Nope. Not this time.”Last summer, my two-year-old daughter asked me to pass the ketchup in Spanish, the language we spoke at home due to my Cuban background. My toxic mother-in-law growled, “Speak English.” I shot back eye daggers and my husband, a man who avoids confrontation at all costs, spoke up so that I wouldn’t have to. I was able to hold my tongue yet again that day, but after years of a quiet simmer, my blood began to boil, and my mama bear teeth started cutting through the gums.

At that moment, I realized this: Yes, she was someone’s mom, but now, so was I. Whereas before I felt the unequal footing of her adultness, simply because she was married and because she was a mother, that was no longer true. She was no longer on a different level — she was on my level, and that changed everything.

After having kids, we understand what it means to beat our chests and protect someone at a visceral level. We understand that it’s our responsibility to protect their little bodies but, just as importantly, their little hearts and minds. When other people make them feel bad about themselves, we help them see the good, and when others claw them down, we help them rebuild. We remind them they’re enough every day. Every single day we protect them from predators known and unknown. Our responsibility to them isn’t just to patch up the scraped paws; it’s also to teach them how to avoid the scraped paws.

This summer, when, in a fit of misdirected anger toward me, my mother-in-law called my kids bratty — in front of them, and others — the weak and fragile vision of us ever being friends went jumping out of a fiery building and crashed to the floor. I looked her dead in the eye and gave her a chance to retract, “They’re not bratty.” She refused the olive branch and looked at me with the same steel daggers as always, and asserted, “Oh yes. They are.”

Twice more, with my kids standing beside me, I allowed her to fix the situation. Twice more, she refused and attacked them with words meant to hurt me. I exploded. Like all kids, my kids can have their moments, but bratty is far from who they are.

Even in their brattiest moments, they aren’t brats. I knew she knew that but this was never about the kids, and I realized that this wouldn’t be the last time she swung her claws at them to hit me; they will always be pawns in her game against me. I slammed open the door and left with my kids as she snarled at me to get out of her house. Gladly I thought.

That day gave me the permission I needed to see this truth clearly: we might never get along. The version of the mother-in-law/friend story was just one version of the story, and I didn’t have to mourn its death. My responsibility wasn’t to her — it was to my cubs, my kids.

This was the exact moment I cut off my mother-in-law.

Our relationship was like beating a dead animal: grossly exhausting and too much effort for something that had long been corroding. Who says we have to get along? Where are the rules that say we must? It would’ve been great if we did, but it’s OK if we don’t.

My kids won’t be called names by anyone for any reason, especially not to keep some peace that might have never existed. I’m no longer the girl dating a son; I’m the woman he married. And I’m no longer the daughter figure to her mother figure; I’m a mother who won’t swallow anger or catch daggers where her kids are concerned.

Mama bears wouldn’t purposefully put their cubs at risk for the approval of an elder bear, and they certainly wouldn’t allow an attack on them. Neither would I. I’m a mama bear now; I get to bare my teeth and show my claws, and make no apologies for protecting my baby cubs. Beware.

7 Emotional Addictions You Didn’t Realize You Could Have