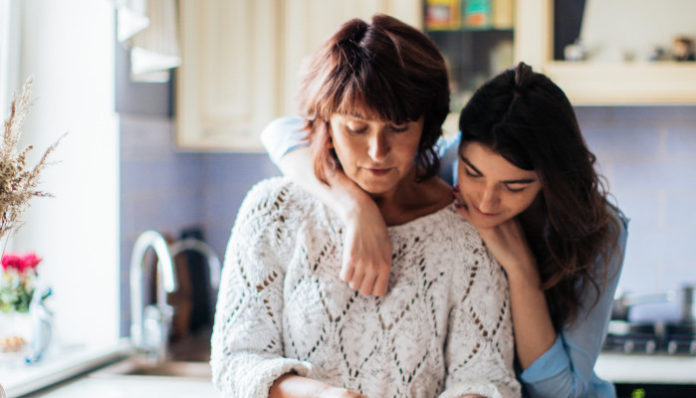 For as long as I can remember, my relationship with my mother has felt very love-hate at best. She’s my mother, which means I care about her, but we butt heads and push each other’s buttons far more than any other mother-daughter duo I know.

While our relationship bothered me for most of my teenage years and a large part of my twenties, I’ve spent the last several years searching for ways to make things better. During that time, I’ve learned several tricks that have really helped me deal with the love-hate relationship my mom and I share.

Because of the unique relationship I share with my mom, I spent years feeling lots of anger and a whole bunch of shame. I often blamed myself for our bickering and wondered what I could do to change things.

However, I attended a seminar session a few years ago that changed my whole perspective. During the session, the speaker discussed how we all carry around negative emotions. He also said that sometimes we even go so far as to pick up negative emotions from other people. He even compared this to picking up someone else’s fecal matter.

“You wouldn’t pick up someone else’s bag of crap, so why do you carry around their emotional baggage?”

Since then, I’ve made a conscious effort to tune into my feelings anytime I have a conversation with my mom. I try to remind myself that her disapproval of my choices doesn’t mean I need to feel ashamed of them. Furthermore, just because she sounds angry doesn’t mean that I need to raise my voice. It’s been a challenge to build my own emotional awareness to do this, but it’s led to some really great moments.

At this point in my life, I obviously know what topics are “touchy subjects” for my mother and me. I’ve found that when it comes to those topics, it’s best to either not bring them up or only talk about them for a short time. Although that means that I don’t always tell my mom everything that’s going on in my life, it means that I can have meaningful conversations with her without things growing heated.

While that’s fairly easy to do when my mom and I talk on the phone, it’s a little harder to accomplish when we spend a lot of time together in-person. For those instances, I actually learned that it helps me to “cope ahead” and think through topics that could come up, then plan out responses that give her just enough information to satisfy her curiosity but not so much that it leads to an argument.

For example, the last time my mom and I grabbed lunch together, I knew she’d want to talk about the kids and, inevitably, my ex since the kids were with him that weekend. So I planned ahead with two stories about each of my kids that I could share and developed some short responses I could use to avoid talking about their dad.

I think one of the most difficult parts of any mother-daughter relationship is establishing and maintaining healthy boundaries. Moms want to be involved in everything and hear every tiny detail about their daughter’s life because they care. However, most daughters want some sense of independence and personal space — and that’s only possible if we set some boundaries.

When I first learned about boundaries, I thought that they would require elaborate explanations and would make my mother think that I didn’t want her in my life. Over the past few years, though, I’ve learned that boundaries are actually more about me and they are simple to manage with a few simple tricks.

For example, I learned how to use a specific interpersonal communication tool called DEARMAN to make requests or say no. I also learned how to maintain boundaries I’ve drawn by using the broken record technique to simply repeat my stance calmly and simplistically. By using these tools, I’ve had a lot more success in maintaining healthy boundaries with my mom in a way that doesn’t make her feel offended or rejected, which makes it a real win-win.

While all of the points I have mentioned helped my mother and I enjoy more of the love in our love-hate relationship as adults, I think that ultimately what has really helped me is acceptance. I spent years wishing that things between my mother and I could be different or that she would wake up and be a new person. But the reality is my mother is who she is, I am who I am, and neither of us can ever change the other person.

So instead I’ve learned to accept my mother as she is in her entirety. Sure, I still roll my eyes when she nags our server at the restaurant, and I definitely don’t understand why she likes country music, but I have learned to accept these quirks and move on.

My mom and I don’t always get along and we rarely see eye to eye on a large list of topics. At the end of the day, though, she’s still my mom and I love her no matter what. I wasted most of my teenage years fighting with her, and now I see that it really wasn’t worth it. By working on myself and learning how to accept her, I’m finding ways to make the most of whatever time we have left together here on this planet. I’m also hoping that by doing this I can ultimately enjoy a better relationship with my own two daughters, too.

Photo by Elly Fairytale from Pexels

The Valuable Lessons You Learn From A Broken Heart